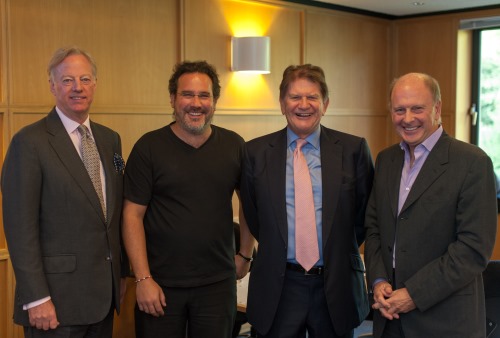 On the 13th November 2013 the 10th Anniversary Conference of the John Madejski Centre for Reputation was held at Greenlands Campus, Henley on Thames. In attendance were academics, business leaders, and representatives of government and civil society.

On the 13th November 2013 the 10th Anniversary Conference of the John Madejski Centre for Reputation was held at Greenlands Campus, Henley-on-Thames. In attendance were academics, business leaders, and representatives of government and civil society.

Eminent speakers for the day included:

Ronny joined Lidl Germany as a District Manager and was appointed UK Managing Director in 2010. Running the UK operations of Europe’s largest retailer he has been driving the establishment of Lidl as a British brand. Lidl’s award-winning low-cost, high quality principles and commitment to CSR are starting to be more widely understood in the UK, making Lidl one of the most attractive employers in the retail sector.

Professor Klaus-Peter Wiedmann is a Full Chaired Professor of Marketing and Management and the Director of the Institute of Marketing and Management at the Leibniz University, Hannover. He is also an Academic Director of the Reputation Institute, New York, and Deputy Chair of the Academy of Global Business Advancement. Professor Wiedmann also consults and advises for several bodies including a branding agency and several international journals. In his lecture Professor Wiedmann explored the issues behind measuring and managing corporate reputations, and looked at past achievements and future prospects.

Paul is the founder and owner of Celador. In the last thirty years he has led the business from a pioneering television facilities company to BAFTA and Emmy awards, and Oscar triumph in the film industry. Paul is probably best known for bringing ‘Who Wants to Be a Millionaire?’ to the world’s TV screens, and for the film ‘Slumdog Millionaire’, which Celador produced and on which Paul was an Executive Producer.

Mark Thatcher is inextricably associated with his mother, the late Margaret Thatcher. However, Sir Mark has had a vibrant and varied life of his own, and has a rich array of stories to tell, from his early days – as his mother sought to fulfil her political ambitions – through various jobs and entrepreneurial business deals that took him around the world. At the conference Sir Mark shared what he has learned as a business leader and a human being, growing up in the spotlight of a political legend with a reputation as ‘The Iron Lady.

Alison is a Director of Bvalco, a specialist in board evaluation, and a qualified psychologist. She has acted as an advisor on culture, and is an Advisory Board Member of the FT Non-Executive Director Diploma and Governance Magazine. A former Olympic rower, Alison is a Board Director of the Boat Race Company Limited. She is currently conducting research into effective boardroom dynamics for a Doctorate in Business Administration (DBA) at Henley Business School.

Björn is a public affairs and corporate communications expert focusing on the societal role of business and other large institutions. Over the past 20 years, he served as head of public relations at Sandoz AG, ABB Ltd and Royal Dutch Shell plc. After working for 12 years as a news agency staff correspondent, bureau chief and regional news editor with UPI and Reuters in Europe, Latin America and briefly in the Middle East, he moved into corporate public relations in 1989. He is now non-executive Chairman, Europe & CIS at Edelman, the world’s largest independent PR company, with over 4,700 people in more than 60 offices, and is a Visiting Fellow at Henley Business School.

To view photos from the day please click on the gallery below:

For more information please contact Vickie Findlater by email at victoria.findlater@henley.ac.uk or by phone on +44 (0)1491 418 776.