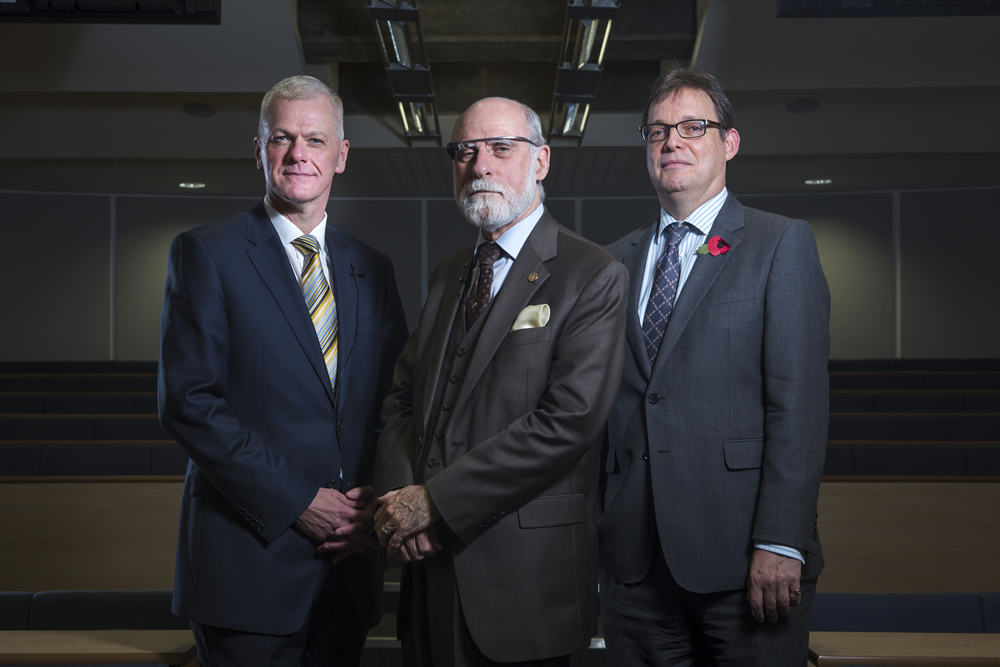 In November, over 200 people gathered in Henley Business School’s lecture theatre at the University of Reading to listen to one of the acknowledged founding fathers of the internet tell his story, and showcase one of the very latest technological breakthroughs.

In November, over 200 people gathered in Henley Business School’s lecture theatre at the University of Reading to listen to one of the acknowledged founding fathers of the internet tell his story, and showcase one of the very latest technological breakthroughs.

The latest in the School’s ‘Engaging Business’ series featured an interview between the Vice-Chancellor, Sir David Bell, and Dr Vinton Cerf, Vice President and Chief Internet Evangelist at Google, recognised and widely decorated as one of the most innovative and influential figures of the technological era. Despite his grandiose title and dozens of honourary degrees, Dr Cerf describes himself as ‘Geek Orthodox’ and insists that we have to change our attitude to failure if we are to develop our capability to its full potential, saying that ‘It’s vital to recognise the idea of “permission to fail”. We need to shoot high. In Silicon Valley, a business failure on your resumé is seen as a mark of experience.’

Dr Cerf’s latest projects include working with NASA’s Jet Propulsion Laboratory on the design of an interplanetary internet.

A lifetime of achievement…

Dr Cerf spoke at length about his background, from his teenage years as a science fiction fan to his studies at Stanford and UCLA. He traced his career path through the US Department of Defense and IBM , leading to the development of the ARPANet hardware – which was to prove to be the predecessor of the internet – and then the TCP/IP protocol. His contribution to the technological revolution has been widely recognised, with numerous honorary degrees and awards.

The audience was treated to a chronology of the historical development of the internet up to and since its launch in 1983, and Dr Cerf expounded on the convergence of internet and mobile technologies.

The audience was then invited to question Dr Cerf, and the range of topics covered included the WikiLeaks scandal, surveillance of personal files, censorship, attitudes to and within China, and the challenges presented by the potential for invasion of privacy,  which are forcing us to evolve new social conventions

The subject of privacy in the internet and social media age has elicited much debate around the world, and even Dr Cerf doesn’t profess to have a definitive answer to the challenges this poses, stating that: ‘the advent of the internet means we will have to evolve new social conventions on what is acceptable in terms of privacy.

Recent negotiations with the authorities in China have sparked much interest too, with the world waiting to see the outcomes of the various political, censorship and hacking issues, but Dr Cerf remains confident that a resolution will be found, and reiterated that: ‘I believe that the Chinese will eventually realise the importance of the exchange of information.’

Putting it all to good use…

Those present were visibly moved by Dr Cerf’s poignant stories of the work being done with Deafax to bring opportunity and assistance to deaf and other disadvantaged people through the application of new technologies. Dr Cerf is President of the Deafax charitable company, and his personal interest in the subject was evident as he described the benefits it has delivered to him and his wife, Sigrid, both of who have hearing disorders.

Now and into the future…

And to end the event, Dr Cerf showed off the ‘Google Glass’ to an enthralled audience, demonstrating how the multimedia eyewear operates, and describing some of the ways in which it can be used, not only as a personal computer device, but also to facilitate simultaneous translation between people using different languages, including deaf signing.

Google Glass displays information in a smartphone-like hands-free format that can communicate with the internet via natural language voice commands, and features integrated video and stills cameras. Although still in the testing phase, it is anticipated that consumers will be able to buy the product in 2014. Dr Cerf clearly shared the audience’s passion and enthusiasm for the device and asserted that: ‘Google Glass has changed science fiction into an engineering challenge.’

Post-event feedback from the audience

Not surprisingly, the feedback after the event was effusive in its praise for the speaker and for the event, and comments ranged from the enthusiastic: ‘Brilliant! Fascinating!’ and ‘what a man, brain the size of a planet!’ to the rather more considered: ‘It’s amazing to consider the possibilities for the future. He really inspired me to be more visionary in my thinking’

Twitter got in on the act too, with the following post echoing the sentiments expressed in the post-event reception: ‘@BetaBrauner I want his glasses!! #VintGCerf at last night’s event #engagingbusiness #googleglasses’

But many of the comments were reserved for the way Dr Cerf spoke about the more humanitarian applications of the new systems, with one delegate saying: ‘Everyone around me was really blown away by the way the technology is being used for good. There were a few tears’.

And the single most common response from those leaving the event was as simple as it was telling: ‘I just didn’t want it to end...’.

Henley Business School’s Engaging Business events are being scheduled to run throughout 2014, acting as a catalyst for developing relationships and dialogue with industry, key contacts, alumni and the wider academic community.

To find out more, visit www.henley.ac.uk/events or contact Charlotte Zittel in the Corporate Events Office on +44 (0)1491 418 777 or at henleyevents@henley.ac.uk