1920s and 30s Semi-detached Homes: a New Beginning or the End of Communities? 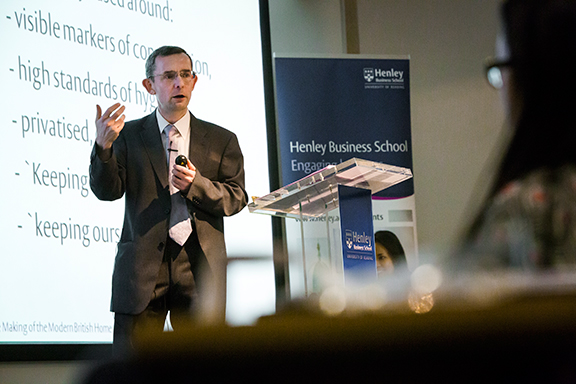 The first public lecture in Henley Business School’s ‘Engaging Business’ series was held at the School’s lecture theatre at the University of Reading’s Whiteknights campus and, despite a downpour of biblical proportions, almost a hundred guests turned up to see Professor Peter Scott present ‘The Making of the Modern British Home’.

The first public lecture in Henley Business School’s ‘Engaging Business’ series was held at the School’s lecture theatre at the University of Reading’s Whiteknights campus and, despite a downpour of biblical proportions, almost a hundred guests turned up to see Professor Peter Scott present ‘The Making of the Modern British Home’.

View photos from the event on the Henley Business School Flickr page.

Introduced by the Dean of Henley Business School, Professor John Board, the lecture was – in the Dean’s words – ‘an important demonstration of how good research can be well applied’, and explored the impact of the modern suburban semi-detached house on British family life in the 1920s and 30s.

Professor Scott is the Director of the University’s Centre for International Business History and has a particular passion for the social history of the inter-war years.

Professor Scott also introduced his recent book – the title of which was used as the title for the lecture itself – which is the culmination of his research into 1920s and 30s homes, including garden suburbs, and the changes they brought about in everything from home ownership, lifestyle aspirations and financial priorities to commuting.

A time of change

Until the early 1920s, only the very wealthy typically bought their own homes, and even landlords often rented the properties they lived in. So at a time when much of the country was still recovering from the Great War, and was in the grip of an economic depression, the idea of outright ownership seemed an unlikely notion.

However, while the impact of the First World War and the fear of a Bolshevik revolution spurred a house-building boom with the first wave of suburban working-class homes – the `homes for heroes’ council estates – the builders, property developers and financial lenders needed to find ways to create a demand for home ownership. A concerted marketing initiative was thus launched to change opinions and make ownership not only more widely possible, but desirable.

The hurdles were significant, none more so than the commitment to moving a significant distance from the family ‘roots’ – often put down many generations previously – and leaving behind extended family members, neighbours and friends from what had been closely knit communities.

But the unified campaign created an aspirational lifestyle away from the noise and danger of urban life, in which women could be the proud managers of their households, and the increasing threats of pollution and road fatalities would be a thing of the past.

The developers and financiers created an innovative package (that endured right up until 2008), which allowed buyers to make regular payments over 25 years, with a mere 5% deposit, and positioned this as not so much of a risk, but more as an opportunity to escape, create a modern new life and – in doing so – build a legacy for their children. This made homes affordable, even for semi-skilled workers.

Encouraged by cheaper land costs, improved public transportation and the lure of a clean, green environment in which new homes promised built-in utilities, front and back gardens, larger room sizes, three bedrooms and innovative new appliances, families flocked to the suburbs to make a new life.

The homes themselves were a stark contrast to the high-density, narrow-fronted terraced houses of the inner cities and towns, being wider with small front gardens but expansive rear gardens. And prospective buyers were lured to them with promises of a whole new culture of domesticity and family-centred lifestyles in these new communities.

The reality was, of course, quite different in some cases. The homes and environments depicted in the advertising were often somewhat different to those that buyers found when they took possession, and problems of mis-selling (and especially ‘jerry-building’ – the construction of inferior buildings for a quick profit) were widespread.

The shift created massive changes in community culture. No longer did neighbours routinely and freely go in and out of each others’ homes. There was a marked decline in the levels of kinship, and in the incidence of shared backgrounds and common workplaces. The new suburban working class was born, with their priorities based on ownership, hygiene and privacy rather than community.

Internal plumbing, hot water on tap, and gas and electricity as standard were all seen as big benefits, as was the lure of new furniture and the wonders of gardening, and this need to ‘keep up with the Joneses’ resulted in many families dedicating so much of their weekly budget to it that they were prepared to spend less on food and lighting, and indeed, fertility. Family sizes reduced, buoyed by improved medical practices that had dramatically reduced infant mortality rates, allowing families to have fewer children, but dedicate more resources to each of them.

The age of longer term planning had thus been initiated, changing priorities and aspirations, before the era of the welfare state and full employment.

And with it, a new culture emerged. No longer were communities bound together by a shared heritage, but by the emerging ‘social filtering’ that brought together house buyers of like mind (or rather, like house price). People now lived alongside others who could afford – or chose to live in – a house that cost roughly the same as their own.

So was it really a change for the better?

The consequences of this massive social change have polarised opinion to this day.

Boredom set in among housewives who moved to the suburbs. The time and cost of commuting to work rose disproportionately. Certainly, communities became more fragmented.

But despite the general popularity of inter-war suburban living, a misguided shift in the 1950s towards inner-city high-rise blocks proved to be a disastrous social experiment. The fact that so many 30s-built homes have outlasted their 50s megaliths and are still occupied today suggests that, in spite of the downsides, the inter-war semi contributed towards a 50% increase in the housing stock, and is still prized by many as the ideal home.

The response from the gathered audience to Professor Scott’s lecture was unanimous in its praise for the subject matter, and the stimulus it provided for post-event discussion, debate and speculation.

‘What a fantastic lecture – I was enthralled.’

‘My mind is running wild with thoughts and ideas about what has happened to housing since then, and what the trends might be in the next decade or two!’

‘Really compelling – I didn’t think it would be, but it was a joy to follow the story, and a real education to hear how and why it developed as it did.’

Professor Peter Scott is Professor of International Business History at the University of Reading’s Henley Business School. Peter is also Director of the University’s Centre for International Business History (CIBH). In addition to The Making of the Modern British Home he has written two earlier books, including Triumph of the South: A Regional Economic History of Early Twentieth Century Britain, which was awarded the 2008 Wadsworth Prize for the best book in British business history.