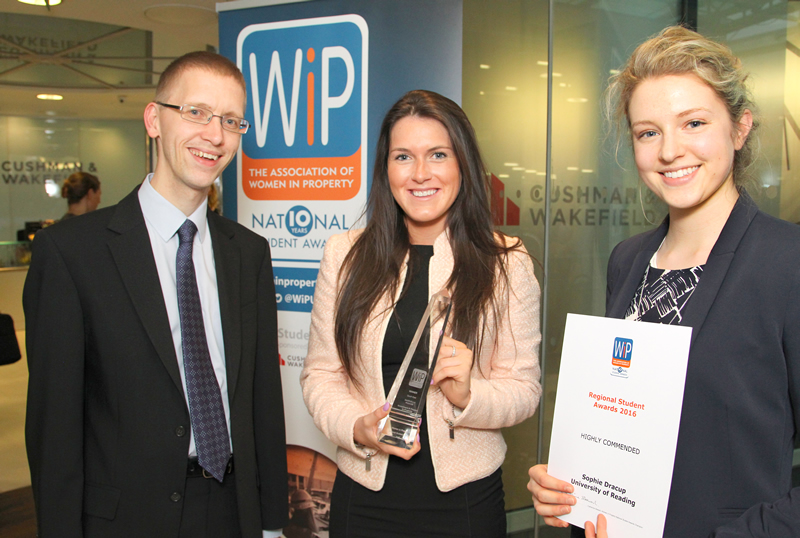 Second year Real Estate & Planning student Stacey Pascoe has won the Women in Property National Student Award for the South East area. The Awards aim to highlight to industry the necessity to link with Universities early in the education process and also improve the students’ knowledge on the career options available to them.

Sally Morris-Smith, of Shepherd and Wedderburn and Chair of the South East branch of Women in Property, said ”Stacey has done really well to win one of the regional Awards and we are delighted she will be representing the South East at the national final in September.  This is a tough competition with some extremely talented, enthusiastic and professional young women taking part, all of which bodes well for the industry recruitment pipeline."

Stacey receives a cheque for £300 and a trophy. She said "I was thrilled and honoured when the University of Reading nominated me for these Awards, the whole process has been an amazing experience. I've learnt a lot, made some great contacts and met some really interesting people including the judges - who I would like to thank for putting their faith in me. I would personally like to thank Jane Batchelor and Dr Devaney for their support, not only during the Women in Property Awards but also for their advice on preparing for the transition period between University and my career path into Commercial Real Estate.”

In addition to Stacey, two other REP students attended the ceremony; Sophie Dracup was awarded Highly Commended and Faith Dulson received a nomination.