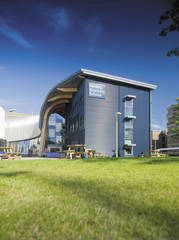 The John H. Dunning Centre for International Business and Centre for Institutions and Economic History at the University of Reading hosted the 12th ISGEP workshop on 28-29 September 2017.

This workshop brought together research on international firms both from the perspective of IB and applied international trade (IT) scholars. Despite their common roots, IT and IB have developed into two distinct and somewhat disconnected fields of study. The recognition of the role of firm heterogeneity and the extensive use of firm-level data create the conditions for a convergence in theoretical and empirical approaches between the two disciplines.

The key speakers at the workshop were Beata Javorcik (University of Oxford) and Nigel Driffield (Warwick Business School), two distinguished scholars who are uniquely placed to bridge these two communities.

In an appreciated plenary talk on “Brexit and Foreign Investment in the UK”, Prof. Nigel Driffield (Warwick Business School) presented a rigorous econometric analysis of the long-term trends in inward FDI in the UK. Using macroeconomic data since the 1960s, he showed that currency fluctuations and economic uncertainty changed the structure of inward investment.

A sterling depreciation in a period of near-zero growth, inflation and policy rates, like the current one, can fuel a prolonged negative impact on inward FDI. Inward FDI growth will only be positively affected by a sterling depreciation after Brexit if the latter drives the UK economy to a period of highly volatile growth, inflation, interest and exchange rates, a scenario rather unlikely.

And even then, the sterling depreciation benefits would only last a short period of time.

The same analysis has highlighted that entering the EEC in 1973 has provided the biggest non-transitory boost to inward FDI in the UK in the last 5 decades. This parallels evidence showed by Dr. Randolph Bruno (University College London) that, after analysing bilateral FDI flows in the OECD countries for the last 30 years, has concluded that countries entering the EU have experienced a boost in inward FDI in the order of 38%.

Professor Driffield also reminded the audience that inward FDI have financed the last three decades of negative trade balance in the UK, and the UK has benefitted more than any other European countries in terms of FDI from non-EU countries (namely the US). Due to cultural proximity, the UK is an extremely attractive location for US investors seeking to access the Single Market and to connect to supply chains in the EU. Should Brexit imply more difficult access to the Single Market, UK inward FDI could take a big hit.

Finally, the workshop explored how exporters are affected by the current period of sterling depreciation and the uncertainty about the ongoing negotiations and the future of the UK after Brexit. On the one hand, the undergoing depreciation is making British exporters apparently more competitive but, as Professor Driffield has noted, nearly half of what is exported is effectively made from imported inputs. While it may seem that some UK exporters have gained from the recent depreciation, as they restock their warehouses, they will discover that much of the price advantage that accrued from the devaluation is eaten up in price increases in imported components.

On the other hand, using a survey on 268 Small and Medium Enterprises (SMEs) based in Kent, Dr. Fragkiskos Filippaios (Kent Business School) revealed that only 16% of SMEs believe that Brexit will have a positive impact on their operations, in contrast to 45% that expect a negative impact. For exporters and importers, the proportion of companies that expect a negative impact is close to 60%. Furthermore, due to Brexit-related uncertainty, 68% of firms are currently postponing investments in innovation.

In conclusion, research presented at Henley Business School suggests that the current depreciation of the sterling and the uncertainty about the future after Brexit is likely to have dismal long-term consequences, both on foreign investments in the UK and on the competitiveness of UK exporters. This is all the more worrying if we think that, as noted by Professor Driffield, many UK firms, despite not being international themselves, sell to other firms that most likely are exporters (mostly towards the EU market).