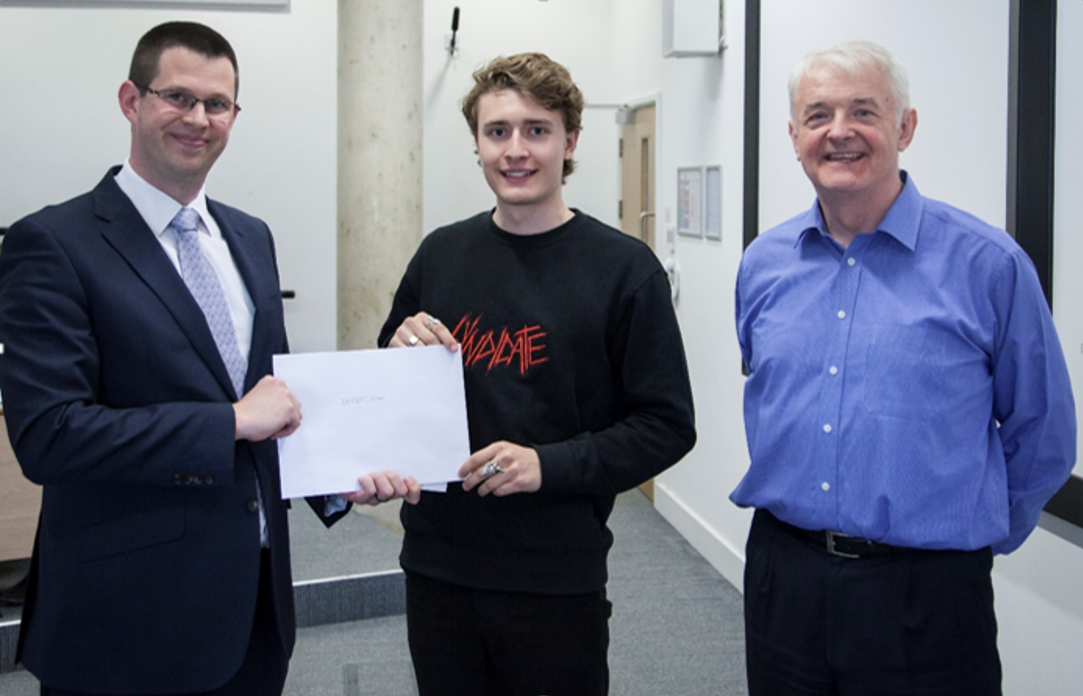 On 26th April 2017 the Henley Centre for Entrepreneurship (HCfE) hosted the 2017 final of the IDEAFEST Business Idea Competition.

On 26th April 2017 the Henley Centre for Entrepreneurship (HCfE) hosted the 2017 final of the IDEAFEST Business Idea Competition.

Co-founded with Pitmans in 2014, the annual Competition invites current students of the University of Reading to submit their innovative business ideas. This year saw a record number of applications submitted, making it a tough choice for the panel to select the finalists. In the end six finalists were selected and they all gave their best performances, leaving the judges again with difficult decisions to make.

The judges were unanimous in their choice voting Magnus Ronning, a first year student on the BSc Business and Management Programme, the winner of the 2017 IDEAFEST Business Idea Competition. Magnus, who already has a strong following on social media, won with his idea Ronning Co, an online fashion streetwear supplier targeting young consumers through social media sales channels using video medium. The most revealing aspect of Magnus’ idea was that it is already a reality, with two successful sales campaigns and revenues banked with more campaigns planned this year.

On winning the Competition, Magnus said: “I sincerely enjoyed participating in the IDEAFEST competition. For me it was a great opportunity to explore and build on my current business idea and it was an amazing experience to pitch and present it in front of the judges. I think anyone who walks around with an idea should participate in IDEAFEST and similar competitions, because having an idea is great, but presenting it is amazing! It was incredible to actually win the competition, but even more exciting that the idea could turn into a career.”

Daniyar Medetov and Michael Lvov came in second place with FeedMyPet, a smart feeder for pets that provides pet owners with internet access and control over feeding their pets and the first ‘Internet of Things’ product presented at IDEAFEST.

Remarking on his second place, Daniyar said: “IDEAFEST is not really about the competition. Our biggest challenge in a race is a lack of motivation. We are always competing against preconceived ideas. It's not really the person next to you that you worry about. Moreover, IDEAFEST is a great opportunity to really start believing in yourself as well as it’s a great platform to testify your idea. The overall quality of the presentations was fantastic which pushed us work even harder. We believe FeedMyPet is an extremely innovative idea and illustrates a clear route to commercialisation. Likewise, the quality of expertise judges provided us would be extremely helpful for further development of the idea.”

Placed third by the judges was Elle Voysey with Choc Fu, a business idea that is a range of desserts with health promoting ingredients. Elle’s first product is a chocolate flavoured dessert that is a blend of silken tofu, premium cacao and agave syrup; during her presentation the dessert was sampled by the judges and rated as ‘delicious’.

Elle said of her third place: “IDEAFEST has helped me refine a business idea, target audience and product. I’ve been well supported by Henley Centre for Entrepreneurship throughout the process and am looking forward to applying the feedback the judges have given me.”

On announcing the winner, Phil Smith, Partner at Pitmans and member of the judging panel, said: “I was delighted to announce Magnus as the winner of IDEAFEST 2017, the remarkable early success of his clothing brand Ronning Co having placed him at the head of this year’s extremely competitive field. It is hugely encouraging to see such a diverse range of entrepreneurial talent being nurtured in the heart of the Thames Valley. We at Pitmans wish all of the entrants every success for the future and look forward to continuing our successful partnership with Henley Business School into the future as HCfE goes from strength to strength.”

Here is what the other finalists had to say…

Immanuel Neumeier with his idea Macrofit, a nutritionally balanced fresh meals service delivered by a food truck, said: “I’m happy about having participated at the Henley IDEAFEST Competition 2017. Next to my entrepreneurial modules, this extracurricular activity provided an opportunity to develop my own business idea and demonstrate my passion for it. This occasion was ideal to take theory into practice, returning the highest possible educational merit. Working as a solo founder, I had to cope with the whole range of entrepreneurship, which encouraged me to deal with the uncomfortable activities and stretch my comfort zone but also gave me a professional environment to work in. For me, this was by far the most valuable experience at Henley Business School.”

Peter Challis with his idea Wealth Collective, an online investment club which provides crowd managed funds, said: “IDEAFEST was a great experience, kindling my entrepreneurial business idea which the competition pushed me to develop. I will be taking this idea further, fuelled by the confidence the experience has given me. Thank you to all the judges, sponsors and organisers and congratulations to Magnus!"

Lucas Cimino with his idea Dusk to Dawn, a purchasing platform app that connects integrated nightclubs and the club-goers that that frequent them, said: “IDEAFEST is like the bridge between what you learn in class and what you experience in life. It allows you to truly make use of the knowledge you acquire throughout your degree and lets you have fun along the way. I have made many connections that have been crucial in the development of my business and look forward to the new ones I will make due to it. The creation process of a business is an adventure that should be cherished. I now aim to use what I have learned from this experience to make my dream a reality.”

In winning the Competition, Magnus receives £1,000, Daniyar and Michael receive £500 for second place and Elle’s third place finish sees her awarded with £250. The money is to be used to help them further develop and commercialise their ideas.

In addition to the cash prizes, the top three all receive mentoring from HCfE and Pitmans and as a special prize, Magnus also receives two complimentary tickets to the 2017 International Technology Conference being hosted at Microsoft in Reading. All finalists also received a copy of the recently published book titled ‘Little Wins: The Huge Power of Thinking Like a Toddler’ by Ella’s Kitchen founder Paul Lindley, with a foreword by Sir Richard Branson. Already hitting the best-selling book chart on Amazon, Paul describes the behaviours of toddlers that adults have forgotten which are crucial for success as an entrepreneur. Now on the HCfE recommended book list for all students!

The Competition also saw the audience vote for their winner enabled by Poll Everywhere, a web based interactive audience response service. The result was a surprising dead heat between Dusk to Dawn and Ronning Co, each polling 27% of the votes cast by the audience.

Congratulations to all finalists from Pitmans and HCfE.

The judges of the Competition were:

IDEAFEST is co-founded and sponsored by Pitmans.