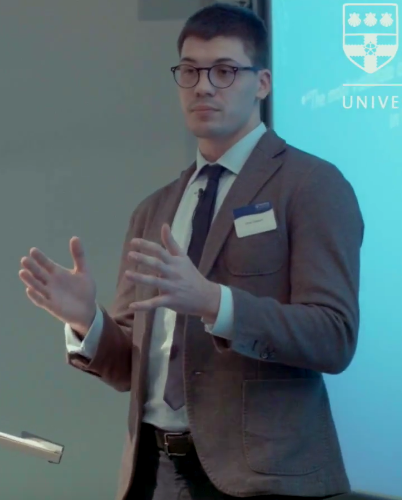 Research by Uros Delevic, PhD candidate from the John H. Dunning Centre for International Business and Strategy, is being used to inform policy work by the House of Lords Select Committee on International relations.

The International Relations Committee launched an inquiry into the UK and the Balkans, with a primary focus on UK policy towards those countries of the Balkans not in the European Union. In particular, it was focused on the UK approach beyond Brexit.

Uros Delevic was invited to give evidence to the committee at Westminster due to his research into foreign direct investments and economic policy in transition countries. He also contributed to ‘The UK and the future of the Western Balkans’ report which was published in preparation for the Western Balkans Summit.

He told the committee he believes that the UK relationship with Western Balkans requires pro-active trade and investment strategy and said:

“An average economic growth of 3% across Balkan countries is not enough for the eradication of poverty and foreign direct investments are not complementing domestic industry, but rather acting as a substitution, which discourages entrepreneurship. The UK’s biggest trading partner in Balkans is Serbia but traded value is no more than $300 million. This is completely insignificant, knowing that Serbia traded over $ 2 billion with Russia and over $ 4 billion with China.

In the last couple of years, China agreed major investments in all Balkan countries, worth about 10 billion euros. Those are development-oriented projects like infrastructure in Montenegro, linking the country’s port of Bar on the Adriatic Sea to the border with Serbia where China also builds a new 350MW unit at the Kostolac thermal power plant complex. On the other hand, trade and investment with the UK has mainly stagnated. This is a clear sign that we need re-engagement of the UK government with Balkan countries”.

Other issues for greater cooperation between the UK and Western Balkans, identified by Uros, included a lack of UK support for the institution building in Balkans. He noticed the inconsistency of UK policy towards protection of the principles of sovereignty and property rights in Balkans.

In the near future, direct UK interest in the Balkans is commercial. The UK should provide grounds for its companies to operate freely in the regional markets, especially in the energy and IT sectors. At the same time, there is room to eliminate importing barriers for goods and services from the Balkans.