The Centre for International Business History is committed to conducting research projects focused on the past, with the view of allowing practitioners and policy-makers today to draw from a wider pool of knowledge and experience, in order to make more informed decisions.

This is Dr Marrisa Joseph’s current research project which aims to explore how women circumvented gender cultural and social barriers to become respected writers and earn a living from selling their literature. Domestic writing (books and articles on cooking, fashion, etiquette, etc.) enabled more women to have a space in the publishing industry, and granted them some editorial power. Drawing on archival documents and periodical publications, the project examines editors and writers such as Willa Cather (1873 – 1947) editor of Home Monthly and Isabella Beeton (1836 – 1865) founder of The Englishwoman’s Domestic Magazine first published in 1860. Beeton went on to became an authority on cooking and domestic home management and her book Mrs Beeton’s Household Management is still in print today. This research project has received funding from the Barnett Foundation.

Banks and the Finance of Industry

Dr Lucy Newton has been examining the issue of banks and their financing of industry since covering this in her thesis, and the research is on-going. In examining nineteenth century banks, key themes include the impact that bank lending on regional and national economies; the nature of trust between banks and their customers; the structure of banks, in particular their propensity to branch; and the use of local networks in building financial institutions and assessing customer creditworthiness. The work has moved forward into the twentieth century to consider the changing nature of financial provision by banks following the amalgamation movement in Britain, starting in the 1880s and culminating in 1918 with the remained ‘Big Five’ clearing banks. In the twentieth century, intervention by governments to involve banks in promoting economic recovery and/or the provision of finance to small-scale enterprises has been considered with Professor Peter Scott. 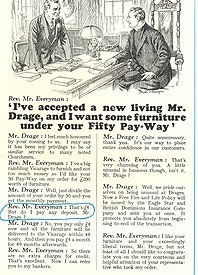 Professor Peter Scott assesses attempts to create a mass market for consumer durables in interwar Britain, with case-studies of a number of major industries, including furniture, radios, vacuum cleaners, other electrical appliances, and telephones. We find that, contrary to the arguments of some earlier scholars, British producers were often highly innovative in marketing and found various methods to both communicate the virtues of their products, and the `easy terms' on which they could be purchased, to a new, mass, market. The project also reveals the importance of retailer-led marketing initiatives in some sectors (such as furniture); the impact of marketing techniques imported from the United States; and the persistence of high production costs in some cases, despite a major expansion in annual sales.

The managerial revolution in British and American Retailing

Britain has long been known as a ‘nation of shopkeepers’. However, the UK has a poor reputation for the quality of its management and the efficiency of its corporate sector compared to the United States, typified in the popular mind by the comic figure of David Brent. Such a view is supported by a substantial volume of historical literature. Moreover, some influential recent accounts paint Britain as unable or unwilling to adopt the ‘managerial revolution’ or new innovative retail technologies emanating from the USA, owing to ‘barriers to retail industrialization’.

What forces shaped and constrained consumers’ and households’ expenditure and related behaviour before World War II? We examine key questions such as: were some workers willing to cut back on “essentials” to maintain appearances; what forms of credit were used to enable households to buy goods they couldn’t fund from that week’s wage (and how effective and efficient were they); how paid employment influenced access to resources within the household; and how firms adapted their marketing strategies to meet the requirements and realities of working-class budgeting.

· we show that families at the bottom end of the Edwardian white-collar income spectrum demonstrated middle-class status through observable consumption, at the cost of squeezing other expenditures, including ‘necessities’, such as food. This had negative economic impacts, lowering living standards due to inefficiently high budget shares for positional goods in order to demonstrate “distinction”. For more details see.

· we show that households made extensive use of expenditure-smoothing devices commonly ascribed to less developed economies. Families' reliance on expenditure-smoothing is shown to be inversely related to household income, while households also used these mechanisms more intensively during expenditure crisis phases of the family life cycle, especially the years immediately after new household formation. For more detail see.

· we explore how resources were allocated within the household, using data on discretionary leisure spending. Breadwinner–homemaker households were

· characterised by strong power imbalances that concentrated resources—especially for individualized expenditures—in the hands of those family members who engaged in paid labour.

· The 1930s witnessed an intense struggle between gas and electricity suppliers for the working class market, where the incumbent utility—gas—was also a reasonably efficient (and cheaper) General Purpose Technology for most domestic uses. We show that both utility providers developed strategies of credit provision and fuel tariffs that went at least some way toward meeting working-class household requirements, a process that was largely driven by competition between local gas and electricity undertakings. For more details please see.

We are currently offering a fully-funded PhD studentship on changes in household expenditure and behaviour over the twentieth century. For more information please contact Prof Peter Scott or visit our PhD website.

The development of nineteenth century banking

A total of 138 joint-stock banks were created in England and Wales between 1826 and 1844 following the 1826 Bank Act, prompted by the banking crisis of 1825/6, which allowed the formation of such institutions. Research into these new financial institutions and their development through the nineteenth century has examined the relationships between bank managements, shareholders and customers; how these new institutions found a place in the market, in particular in developing a strong corporate identity; and how these banks successfully expanded via branch networks.

The use of artefacts in studying bank history

This on-going project conducted by Dr Lucy Newton and Dr Victoria Barnes (please link to https://www.rg.mpg.de/barnes/en), started with an analysis of the use of portraits of bank directors and bank managers in the first half of the nineteenth century. Joint stock banks were a new type of institution, having only been permitted to form after the 1826 Bank Act. In establishing their reputation in the market, banks commissioned portraits of their directors and managers to hang in their branches. These portraits signalled the human face of banking, and showed customers a face they could trust, but also served as a remind to staff that they were being monitored. Moving into the twentieth century, further research examined the collection and display of portraits of past Lloyds Bank Chairmen in the 1960s. The practice continues to this day and the portraits are hung in the corridors surrounding the boardroom in Lloyds Bank’s London Headquarters. Further artefacts being considered are uniforms, introduced by Barclays Bank in the 1970s. Finally, the relevance of bank head office architecture has been analysed. In particular, Gibson Hall, the former headquarters of National Provincial Bank built in 1865, has been considered. This history of this building shows the usefulness and then the obsolescence of such physical structures over time, as the requirements of banking businesses change.

Income inequality in the first half of the nineteenth century

Peter Scott and James Walker (please link to their websites) use newly re-discovered estimates to examine shifts in British income inequality and their causes between 1911 and 1949. They show that income was substantially more concentrated at the top of the income distribution in 1911 than previous estimates suggest, and that the top 1 per cent were the principal “losers” in the subsequent trend towards reduced income inequality. They also find that policy shocks, policy-responses, & non-market mechanisms created more equal distribution (1911-49) and enabled governments to tax the rich and limit the “offshoring” of their wealth through capital controls and other means. Since this period the return to globalisation has had the opposite effect, both for high worth individuals and corporations.

Academic research into the value of visual images of finance during the Victorian era for historical research has to date been very limited.

Henry Sless's thesis aims to address this gap by providing a critical analysis of images of finance during the whole Victorian era. The scope of the thesis has been limited on space grounds to specific aspects of visual culture (primarily digital records of images from nineteenth century periodicals) as well as specific elements of finance (primarily the areas of private and private trust). The former reflects the relationship between private investors and corporate management exemplified in the explosion of capital markets activity in the period. The latter is represented by a review of taxation reflecting the relationship between taxpayers and the government and the former’s acquiescence or unease over the level and rates of taxation).

Three primary research chapters covering Financial Failures, Men of Finance, and Taxation are proposed. The first two chapters cover the complex often litigious relationship between investors and directors ensuing from frequent corporate mismanagement during the Victorian era, aided by a lax laissez-faire regulatory environment. The latter chapter covers the development of taxation during the period, ranging from the reintroduction of income tax at the beginning of the period in 1842, and ending with the introduction of ‘death duties’ in 1894.

Business history literature on Africa has largely been written from a political economy perspective on colonisation, and later, decolonisation. Analysis of business performance has not carefully been considered. This project of Akram Beniamin focuses on the firm being the distinctive type among the economic units dedicated only to business. It offers new evidence on the performance of firms, mainly foreign, in Egypt in the Twentieth century up to 1952.

The University of Reading holds many important international business archives, including those of WH Smith, Huntley and Palmer, Woolworths and leading publishers and printers.

For a full listing of our Special Collections, please visit the archive index.

Additionally, the University holds the papers of individuals such as Lyndall Urwick, Professor John Dunning and Professor Alan Rugman. What is more, large numbers of international business records may be found in the University's Museum of English Rural Life (MERL). These include Sutton Seeds Ltd and the engineering company John Fowler and Co (Leeds) Ltd.