John H Dunning OBE was a British economist and is widely recognised as the father of the field of international business. 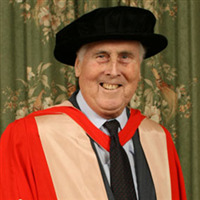 The Dunning Centre was renamed in 2008, in his honour, and stands as one of the world's premier research centres in the field. At the time of his death in 2009, Professor John Dunning was Emeritus Professor of International Business at Henley Business School at the University of Reading.

Professor Dunning joined the University of Reading as the first head of the then Department of Economics upon its establishment in 1964. He spent more than 50 years research into the economics of international direct investment and the multinational enterprise and authored, co-authored, or edited 50 books on this subject, and industrial and regional economics.

In 2007 the John H. Dunning Centre for International Business paid tribute to Professor Dunning, holding a celebratory event to mark both his contribution to the field and his 80th birthday. Professor Dunning was awarded an OBE in the Queen's 2008 birthday honours and received an Honorary Degree of Doctor of Letters from the University of Reading that same year.

In December 2004, he was presented with a Lifetime Achievement Award at the annual meeting of the European Academy of International Business in Ljubljana, Slovenia.

In February 2019, The AIB Executive Board awarded Gold Medal to Professor Dunning at the 50th celebration of the JIBS journal for an exceptional contribution in JIBS in the first 50 years.