Heads Together and Row: Sunset rowing 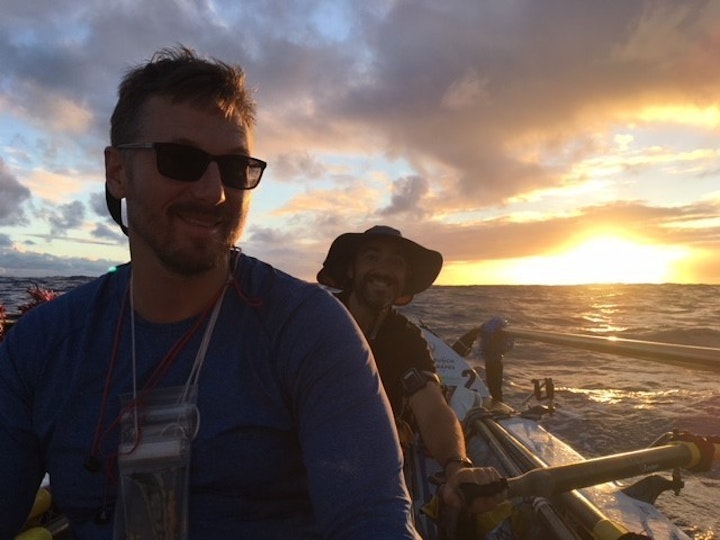 It's day 17 of the race and the crew have rowed an impressive 61 nautical miles in the last 24 hours. They have now rowed the equivalent of over 1,000 miles!

Alison has sent us a photo of the team rowing at sunset saying "it almost makes it look really nice! The early evening shifts are generally really lovely, although tonight is pretty choppy (photo was taken couple of days ago)".

Atlantic Campaigns have also provided some background information for those who are following the race on the YB Races tracker: "The thick red line represents the shortest route to Antigua, given the way points determined by the Race Safety Officers. As soon as the teams clear the way points, the thick red line actually then follows the rhumb line route directly to the West Indies. However most teams like to take advantage of the naturally occurring Trade Winds (as they are at their strongest at this time of year) which can be found slightly further South of the rhumb line. Now that all the teams are racing West (after initially heading South), the leaderboard will start to be more accurate and by mid next week we will start sending out ETAs (expected time of arrival) for the leading boats".

The tracker shows the current speed of the boats, distance left to row and the VMG (velocity made good). The VMG is the team's progress towards a certain point - in this case Antigua! This information enables race followers to get an estimate of the time of arrival. However this is weather dependent and the race organisers added that "the weather will be good and in their favour but also with some confusing weather coming in over this coming weekend...."

We are keeping our fingers crossed for good weather! As always we will continue to update the website as the team progresses.