Heads Together and Row: My next challenge 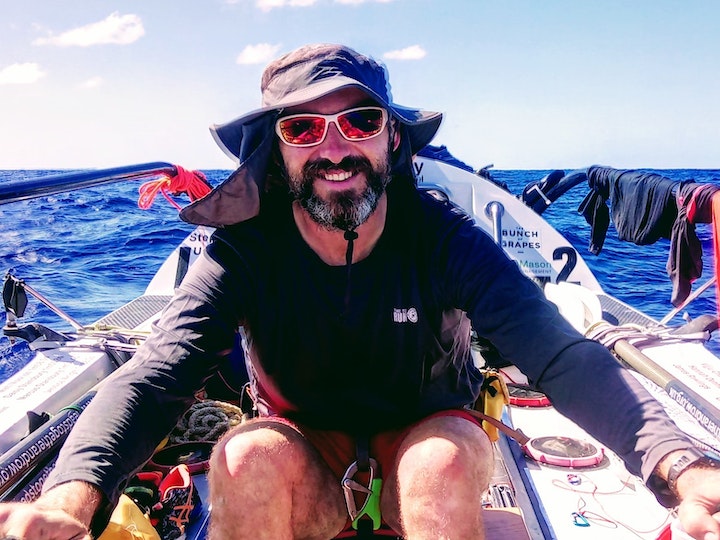 With two weeks to go until Henley Business School publishes the findings of its research project with Heads Together and Row, skipper Toby Gould reflects on the race and what life has been like since he set foot back on dry land.

I’ve been back on land since the start of February. Over 100 days have passed incredibly quickly, in exactly the same way that 50 days at sea did not.

Apparently we really did successfully row across the Atlantic Ocean. I often forget as real life has taken over, the quest to row an ocean is no longer occupying my central brain space as it did for over two years, and by and large I’m over the physical recovery. I am though still reminded regularly when my path crosses with someone I haven’t seen since before the race. “Did you enjoy it?” is a common question and one I find difficult to answer. I enjoyed the start. I truly enjoyed the finish. Having not seen land or another human face for the best part of 51 days, we rowed into English Harbour at dawn, to what at the time I thought were flocks of pterodactyls circling above us, but which were later confirmed to be pelicans. That may sound odd or funny. But genuinely, I was delirious and the adjustment to the sight and sanctity of a strange land, the smell of flora, familiar and unfamiliar faces, animals, chilled drinks and actual food was a shock to the system. A very welcome shock, but a shock nonetheless.

Many of the actual seconds, minutes and hours between the start and the finish, while an amazing experience, were not what I would describe as enjoyable. But that’s fine by me. They weren’t supposed to be enjoyable, they were supposed to be tough and they lived up to expectations. The highlights were more than worth the pain. When I say highlights, I don’t just mean the friendly giant sea turtle, the pods of baby dolphins, the whales, Betty coming to visit, the stars, the super moon, deep and meaningful chats with Rufus, reaching the ¼, ½, ¾ milestones…, but also the daily highlights. First-light followed by dawn was a joyous time with high spirits all round and a great feeling in the boat. It was amazing how a slip of light could transform my mind, body and soul so completely. It was almost worth enduring the never-ending night shifts - at their worst eight hours of rowing in dark, wet stormy seas in two-hour shifts separated by 30-minute broken sleeps and the odd flying fish in the face - just to experience the sun coming up in the morning. That’s the thing about this challenge – the best bits were only the best bits because the terrible bits were so terrible and I don’t believe there is any other way to experience such levels of euphoria.

Just as frequent a question is “did you ever do that rowing an ocean thing you were talking about?” Now, I usually like talking to people about the row but I’ll be honest, sometimes I just lie, as I did today, and say deadpan “no I haven’t gotten around to it yet” and move on with the conversation. Sometimes I then catch myself wondering if I ever did!

My favourite question is “so what’s your next big challenge?” Whoa! My next big challenge? No, no, no – this was a one-off gig. I might have said some things about trying to row all seven oceans but are you kidding me?! When we reached land I had never been more certain of anything – I would never ever again row an ocean or take on a relentless challenge over 50 days straight. But, and don’t tell my mum, as time goes on I miss it and I long for more of the same. For now I’m going to stick to eating second dinners of cheese sandwiches while sat on the lounge of an evening. I’m not sure how people would value that, as challenges go it’s not the hardest, but it’s not like I’m asking for sponsorship! It’s my challenge and I’m content with it. Seriously though, yes another challenge will follow the row, I’m not sure how I feel about life without the odd challenge thrown in for entertainment along the way. I’ve got a few ideas and there is something in the pipeline for next Spring so watch this space. It won’t be on the scale of 50 days at sea and it doesn’t require a bucket but I am planning on taking Rufus if Justin will part with him.

We are so privileged to have had the opportunity to row an ocean and will be forever grateful to all of our supporters who helped make this happen. To partner with Henley Business School and to take part in the personal and team resilience study was the icing on the cake. I’m full of excitement to hear the results of the study at the launch event on 5 June and to have the opportunity to talk to people about our experiences at sea. I hope to see you there. I hear there will be prawn vol au vents in which case there might also be a marriage proposal on the night!

Henley Business School is hosting a research launch event on Wednesday 5 June where you can also hear more from Heads Together and Row. The event is free to attend but registration is required. Find out more here.