Heads Together and Row: Weather watching 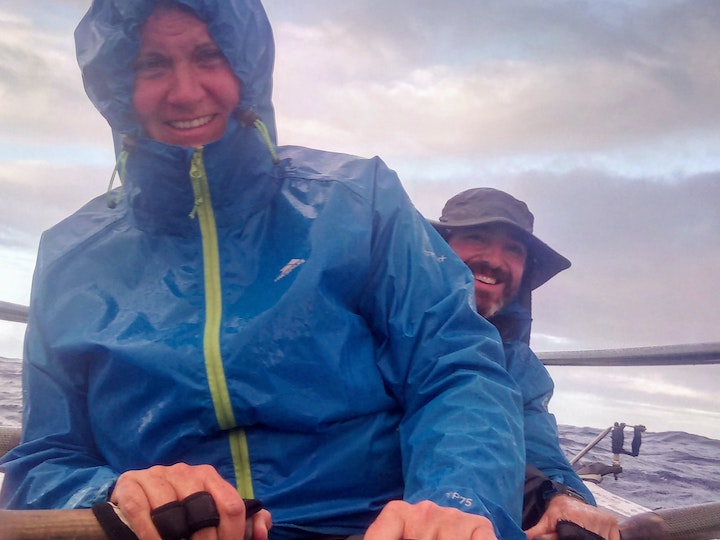 It’s day 33 of the Talisker Whisky Atlantic Challenge and we’ve received an update from Skipper Toby highlighting the different weather patterns the crew has had to contend with in the middle of the ocean.

A word on the weather

If you've been following our progress to date you'd be right to assume from the pictures that it's mostly wall to wall sunshine. Days go past without a cloud in the sky, it's really hot from dawn until dusk and factor 50 is applied to any exposed skin at least every two hours.

But that's not the whole story and besides, what we really care about is wind, waves and their help or hindrance in our passage to Antigua.

So what to say about the weather? There is a lot of it. It is remarkably changeable. It often bears no resemblance to the forecast.

Over the past week we've been told by several credible sources that we're right in the middle of a band of 15-20 knot tail winds yet our flag hasn't so much as twitched in 48 hours. Believe me, when the air is still the heat is insufferable in the middle of the day.

The last couple of nights have brought some excitement. Thursday night was the strongest weather we've seen to date which helped us reach 62 miles in a day. It would have been 65+ but freak waves from the side took out our autohelm repair three times in as many hours which cost us time. We also had an hour or so of sheet rain and squalls from the north and south.

Last night the conditions were fantastic. The sea was largely with us so we weren't being bashed about from all angles as we often are. The moon even came out until about 2am so we could see what we were doing and we made over 2.5 knots an hour for five hours. Then, with no notice whatsoever we had 20-25 knot side winds pushing us south joined in minutes by driving rain that lasted over an hour before calming down again. Two hours later at first light we had the same wind and rain but this time pushing us due north. On the plus side our latest autohelm fix held good (that really really feels like tempting fate!!!)

As I type at 11am (really about 8.30 where we are but we're staying on UK time) the sun is shining again, factor 50 has been applied and the waves, while calmer are all over the shop.

Apparently we have similar conditions for 7-10 days ahead. We were chuffed to hear that because we hope to maintain a daily average above 55 miles from this point on. But who knows what will materialise...!

While I'm here I thought I'd mention five separate whale sightings so far this morning. They all seem to be going the same way as us so fingers crossed they're heading to Antigua and are better at reading the conditions than us!

I should just finish by saying how grateful we are to those people providing us weather forecasts. Each one is immensely useful and motivational. We appreciate we will see all sorts of weather within the general forecast and it will not always prove an accurate prediction. Safe in the knowledge the ocean and the whales know what they're doing - we'll take their lead and see you in Antigua soon!

We also have a fleet update from the Race Safety Officer which sheds light on some of the other challenges facing the crews at the stage in the race. The update also mentions that Heads Together and Row are “all well and morale seemed high”, particularly after seeing another crew, Men of Oar, nearby. There is also an estimated time of arrival for the team, although much could change depending on the weather conditions.

With the fleet now spread out over 1345 miles the last week has been characterised by slow but improving conditions and a generally good, steady state of play with only minor health and technical issues. What is worth noting is the impact that time away from home and tiredness is having on some. Most rowers will be experiencing emotional ups and downs and the decision making process and ability to think rationally is impaired. Having been isolated at sea for a month perception is altered but for some there is the realisation that they still have at least the same amount of time remaining at sea. Sometimes an hour can last for ever and a week can seem like the blink of an eye. This is a very tough realisation especially if a rower is feeling frustrated or low. Speaking with the crews we still get to hear of the great highs and the upbeat messages but also the tiredness and frustration. It is really important at this stage to remind them of why they are here - not just the great causes but at the very basic level - overcoming a fantastically hard challenge, discovering what you are capable of and making yourself do more than you thought possible.

Once again it is worth noting the frustration the slower conditions are causing some crews. When compared with the issues the faster conditions caused last year it highlights the diversity of this challenge and the breadth of mental strength required. Last year saw numerous capsizes and abandonments and rescues by this stage but some crews were considerably faster whereas this year it is far harder rowing but much more stable. As time progresses the crews have to dig deep to find the mental and emotional strength required to succeed. This is what makes this such a great challenge. If it was easy where would the value be?

It is unusual to see other rowing boats but this week Men of Oar passed Heads Together during the night within range of VHF. Heads Together and Row are all good on board despite an auto helm that still fails in tougher conditions. The crew are all well and morale seemed high. ETA 31 Jan.

We are keeping our fingers crossed!

Visit the Heads Together and Row website to find out how you can support the team.