Heads Together and Row: Which way the wind blows 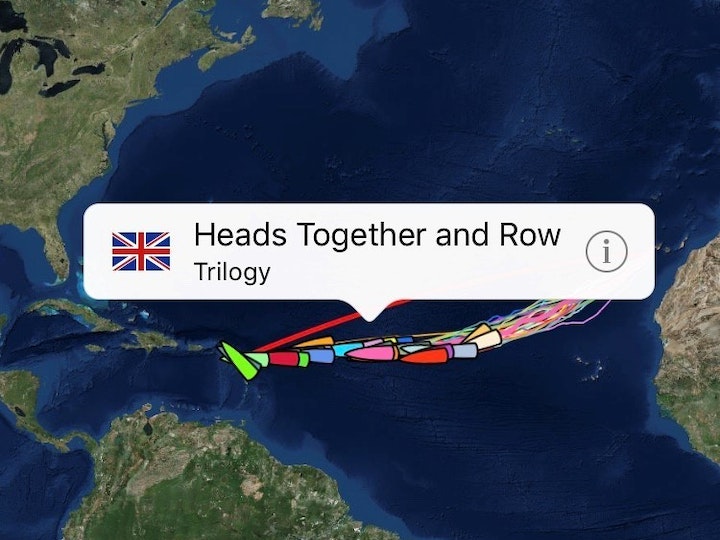 There was high praise for Heads Together and Row in the latest update from the race officers on day 37 of the Talisker Whisky Atlantic Challenge.

Described as a 'massively competent crew', they are going steady in 15th position and only nine miles behind the next boat.

The update notes how they have dealt with a number of technical issues and ‘an auto helm that is temperamental in less favourable conditions’ but adds that ‘they seem to be enjoying their crossing and taking everything in their stride’.

The team’s current ETA is 2-3 February, although this is likely to fluctuate depending on a number of factors including weather, which has been playing up a little according to our latest email from Toby:

“It absolutely poured it down last night (Monday) for hours with 20+ knot side winds - made sure we were all soaked and knackered by this morning. But the sun came through eventually and hopefully a quieter night as I write going into Tue 11pm. The lightning storms were something else - oddly no thunder from some of the biggest lightning - couldn't work that out. Just glad I'm not the tallest person on the boat!”

Now that the faster crews are beginning to make landfall we know some of you may be wondering how and why it is that the fleet is spread across such a huge distance and some teams take longer to cross than others. There are many reasons for this and we have summarised a few below:

Boat type: The crews are competing in two different types of boat – pure class and concept. A pure class boat is the original style of ocean rowing boat with a V-shaped hull (the body/bottom of the boat). Concept boats are a newer design, with a flat bottom which enables rowers to surf the waves. Because of this they tend to complete the crossing several days faster. Trilogy, is a pure class and therefore slower due to less wind advantage.

Weather: As we know from the team’s experiences earlier in the race (when they were forced to deploy the para-anchor just before Christmas), the weather can have a big impact on the fleet, and due to the distance between the boats and their varying positions it can affect some crews more than others. For example in January 2’s weather update, all but the fastest three boats were being affected by thunder and heavy rain, with the rear pack and more northerly boats facing disturbances to the trade winds.

The route: While taking a more southern route is longer, conditions are generally more favourable and the teams can benefit from the trade winds more than the northern crews – although they have a shorter distance to travel.

Boat issues: Many of the crews including Heads Together and Row have experienced minor technical issues during the race (remember their DIY day with the hacksaw and the selfie stick?). Several have had problems with the auto helm, the boat’s self-steering gear, while others have had problems with seats and power. Maintenance tasks are also very important – in particular crews must remember to clean the hull of any barnacles regularly because these can slow them down.

Crew issues: Sounds like an obvious one, but the size and health of the crew also plays its part. The bigger crews are able to row for sustained periods with three on the oars if necessary, and there is some slack in those teams if anyone is tired or unwell. Age and general fitness levels also vary between teams – for example there are competitors aged over 60 in the same race as a teenager.

We think race officer Ian sums the spirit of the race up best in his latest update:

"Whilst two crews are safely ashore and others will be joining them very shortly it is worth remembering those still with many miles to go. Winning and setting a great time is a fantastic achievement but equally so is the long endurance haul of those making a slower crossing. As we say to all crews, it is not so much the speed of your crossing that is important but that when you step off in Antigua you know you have done everything in your power to achieve the goals that you want - be it a sub 40 day crossing or swimming with whales, setting a record or laughing every day. This is such a personal experience and every rower will be after something slightly different."

And as we've seen from their blog posts during the journey so far, Heads Together and Row are certainly having the adventure of a lifetime!

Visit the Heads Together and Row website to find out how you can support the team.