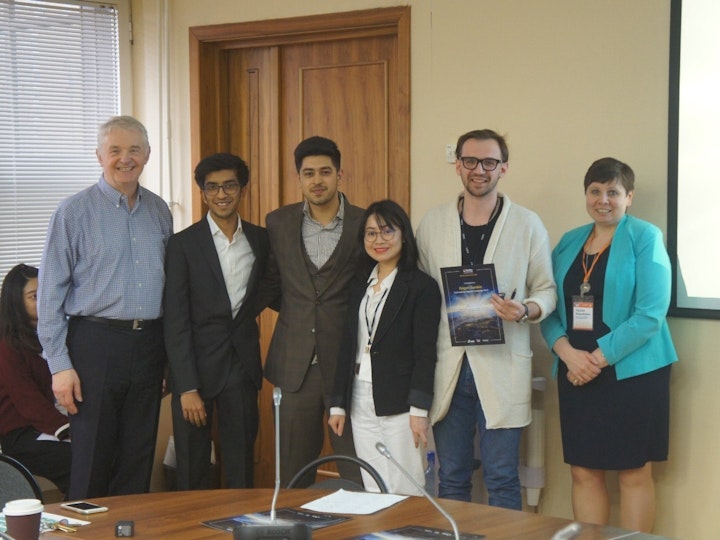 Often referred to as the Harvard of Russia, MGIMO has an excellent reputation and it was an exciting opportunity for Henley Business School students to join with MGIMO student teams, participating in and pitching at their annual business idea competition.

Henley Business School students were also able to provide coaching and resources to the MGIMO teams, which worked on developing their ideas to pitch in front of a panel of judges. Several Henley Business School delegates were on the judging panel, including Jurek Sikorski, Henley Centre for Entrepreneurship's Executive Director, Dr Maks Belitski, Associate Professor of Entrepreneurship, Prof Yelena Kalyuzhnova, Vice Dean (International), and Natalya Radko, a PhD student with Leadership, Organisations and Behaviour. They were also joined on the panel by the winner of the 2018 business idea competition, Katarina Tamarina, who is the founder and CEO of fashion, leisure and sportswear brand Kennedys.

The business competition was a positive experience for all of those who took part and the final outcome was a huge success. The pitches scored highly on both plausibility of business idea and capability of the team. The final scores revealed this year's winner to be Grigorii Sorokin, a first year MGIMO student with his idea TalentsGo, a matchmaker platform that connects employers offering internships and projects with university students.

Upon handing out the award, Jurek commented: "The judges were a majority in selecting Grigorii. He is determined to launch the idea as a business and is already progressing the development of the platform."

Receiving the award, Grigorii said: "I never thought I would win! I am absolutely delighted and hope to make this idea a business success."

In winning the best business idea award, Grigorii collected the special prize of a fully-paid place at this year's Henley Summer Start-Up Boot Camp, a hands-on course for aspiring entrepreneurs to learn the tools they need to start a business from scratch. The Boot Camp will be held during the week of 24-28 June 2019, 10:00am to 4:00pm, in room G15 of the Henley Business School building, Whiteknights campus.

Summarising the visit, Prof Kalyuzhnova said: "It was another successful project with our strategic partner MGIMO. We all had a fantastic international week. It was especially great to see co-operation between Henley and MGIMO students."

Professor Yipeng Liu FAcSS, Professor in Management and Organisation Studies at Henley Business School and Director of the Centre for China Management and Global Business (CMGB), held a webinar on 28 August 2020 titled 'The Challenges and Opportunities of a Global Health Crisis: the Management and Business Implications of COVID-19 from an Asian Perspective'.

A Leadership, Organisations and Behaviour student at Henley Business School has become the first to be awarded a double PhD from a joint programme with Moscow State Institute of International Relations (MGIMO) in Russia.

Professor Yipeng Liu, Professor in Management and Organisation Studies and Director of the Centre for China Management and Global Business, led a dynamic webinar on the topic of global talent for transformation as part of the Henley Challenges series of webinars.