On 18-22 November 2019 a group of Henley Business School students got involved in hosting the Festival of Digital Disruption 2019 by leading a series of fireside chats with five talented entrepreneurs. 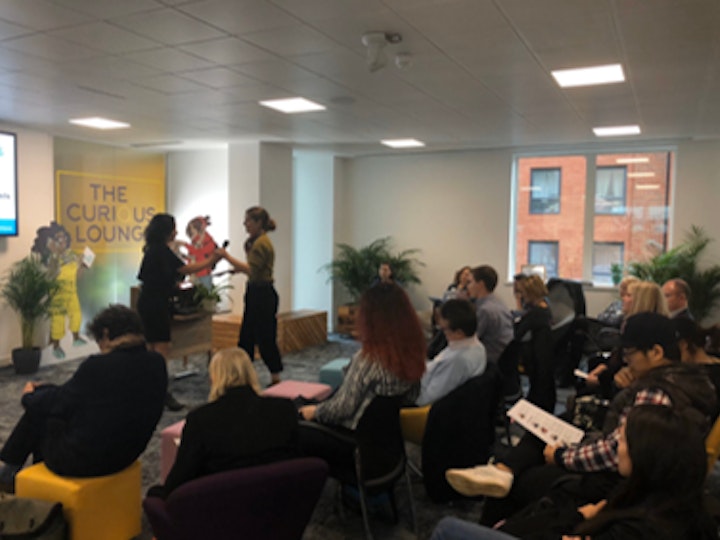 The FoDD, now in its fifth year, is a week long series of events held at the Curious Lounge, located in the Pinnacle building of Reading town centre. These events are supported by Henley Business School and geared towards celebrating digital creativity and innovation by offering talks, workshops and other initiatives to students and local entrepreneurs.

The week kicked off with in style on Monday with a talk by Luke Lang, Crowdcube's co-founder and CMO. Crowdcube are known as the world's first, largest and most active investment crowdfunding platform and Luke has been named by Debrett's as one of Britain's 500 most influential people in 2017, along with being selected as one of the Sunday Times' 'Maserati 100', which recognises game-changing entrepreneurs. Luke shared his perspective on how to change the relationship between a company and its customers by allowing customers to become invested stakeholders and therefore promoters.

Tuesday brought an immersive day in partnership with the Royal Holloway University and the StoryFutures project. The day was full of learning, discussion and exploration of next generation storytelling using virtual, augmented and mixed reality. Attendees heard from pioneering practitioners working on cutting edge immersive projects, including Maze Theory and their new cinematic, feature-length Doctor Who VR game. The afternoon was spent with break out sessions with experts from Royal Holloway answering questions on next generation storytelling and to find out more about innovation funding and support available.

On Wednesday the theme was 'tech for good' and the FoDD hosted Trudie Fell, CEO of BelleVie, who shared to an audience of sixth form students how she is using her tech and business skills to help transform home care for the elderly. She also shared her story about how she left the corporate world behind to embark on a new career as an entrepreneur. Mark Stanley, Director at Coraledge, shared two exciting Internet of Things projects that have been funded through the Smart Berkshire programme. One addressed the safety of female students returning home and the other aims to reduce the number of falls people suffer as they get into their senior years. They were followed by David Thomas, founder of Mintfinity, who shared how his company is built on using tradable values as a means to improve consumer behaviour towards the waste consumerism generates. The day ended with a Q&A with Daniel Melville, a 'Bionic Hero' for Open Bionics. Dan was born without a right arm, but this never stopped him giving everything a try. "When I was younger I used to wear a lot of prosthetics that didn’t really do anything other than make me feel negative about myself," Dan told the audience. "I never thought in my lifetime that I would ever be able to wear something like the Hero Arm. As a kid this was only a dream but now it’s reality it's mind-blowing." Dan has been part of the Open Bionics journey since 2014, demo-ing the arm all around the world.

The evening switched into 'creative for good' mode, with Glug Reading championing creative communities. Three speakers all talked about why they make an effort to develop technology for good: Elliot Coad, co-founder of Offset Earth, Rich Strachan, Managing Director of 3 SIDED CUBE, and Matt Emmett, a self-employed local photographer. They spoke eloquently about their projects, including the world’s first blood tracking app for the American Red Cross, working with the National Trust, National Lottery Heritage Fund, Thames Water and other organisations and an early warning system for people in America's hurricane regions.

Our final day Friday saw the official opening of The Curious Lounge with special guest Emma Jones MBE, founder of Enterprise Nationand best-selling author of the business books Spare Room StartUp, Working 5 to 9, Go Global, The StartUp Kit and Turn Your Talent Into a Business. Emma gave a wonderfully frank talk celebrating her own journey and the trials and tribulations, highs and pitfalls of running an early stage business and students in attendance were positive about the space and facilities the Curious Lounge offers.

Louize Clarke, the Director of ConnectTVT and the Curator of the Curious Lounge, said: "What a week the Festival of Digital Disruption was. As always at the heart of the Festival was a desire to inspire the next generation of entrepreneurs and tech talent, so we were delighted to be joined by Henley Business School entrepreneurship students to help us deliver some of the content. A massive thank you to Temenuzhka, Julia, Sonali, Hitanshi, Kriss, Malak and Ezequiel for their support."

Also present at the FoDD was Henley Centre for Entrepreneurship's Dr Lebene Soga, Lecturer in Entrepreneurship and Leadership. Lebene said: "It was great to have our students take the lead in engaging with these founders in order to hear their stories and be inspired. I am aware that many of those who interviewed the startups, as well as those in the audience, had already begun working on their own business ideas, with some already making sales. As a result the event also created an atmosphere for interaction with founders that are well advanced on the entrepreneurial journey, allowing for quickfire mentoring as students asked questions, established links, and networked with these startups. We look forward to collaborating with the Curious Lounge for many more of these engaging programmes for our students."

Students were positve about the impact of the FoDD, with the 'tech for good' talks proving to be particularly popular. One student said: "It was inspiring that all the people that were there all wanted their businesses to genuinely help people and not just be a way to make money. I found Dan's story especially inspiring because he never seemed to have a negative outlook on him having one arm. Seeing how he changed his life with the Hero Arm and got really involved with it and helped overcome his problems with it was really cool."

One of the attending teachers observed: "I loved Mark Stanley telling the students to 'be a doer, not a critic'. The opportunity to show students the exciting world of start-ups as opposed to the more traditional large company careers is also wonderful."