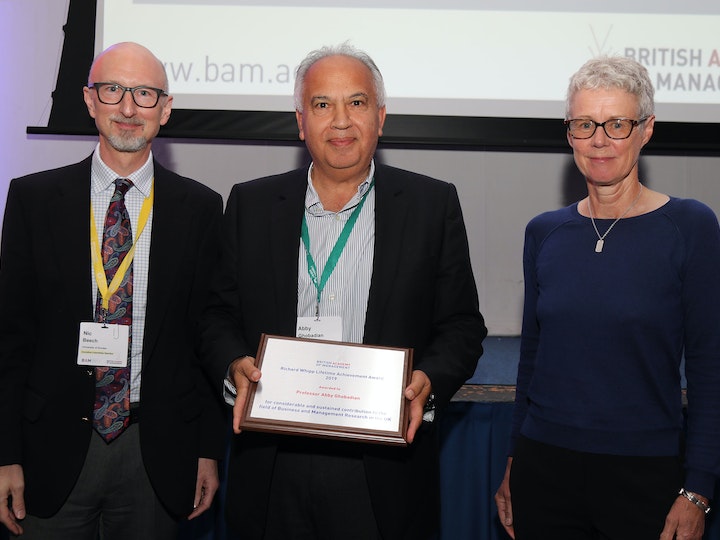 Professor Abby Ghobadian from Henley Business School has been presented with a Lifetime Achievement Award from the British Academy of Management.

The academy is the leading authority in the academic field of management, supporting the community of scholars and engaging with international peers.

Professor Ghobadian, Professor of Management in Henley’s Department for Leadership, Organisations and Behaviour, was recognised for his work studying how organisational performance can be improved, which has been important in advancing knowledge of the relationship between management practices and companies’ performance.

The award also highlights his work with the UK government and the assistance he has given overseas academic institutions.

It is named the Richard Whipp Lifetime Achievement Award in memory of Professor Richard Whipp, an eminent business scholar, acknowledging his contribution in developing the Academy.

Professor Ghobadian has been an academic dean at Henley Business School since 2007, and led the Leadership, Organisations and Behaviour department from 2011-15.

He has chaired the British Academy of Management and is a past president. He has also served on the Department of Business, Innovation and Skills’ Business School Task Force.

“I am honoured and most pleased to be recognised by my peers. The British Academy of Management has made an invaluable contribution to the development of management education in UK. It has been a privilege to serve the academy.”

The award was given to Professor Ghobadian at the academy’s annual conference, held at Aston University in Birmingham.

A symposium investigating key questions around the housing land market was held by the Department of Real Estate and Planning at Henley Business School on 10th January. The aim was to gain perspectives, and exchange knowledge, from the variety of stakeholders with interests in land markets; the event was well attended with attendees from industry, government policy, third sector, professional bodies, land brokers, land promoters and academia.

IDEAFEST Launches Internationally at the Kazakh-British Technical University in Almaty

Henley Business School's IDEAFEST Student Business Idea Competition, a contest to find the student team with the best idea for a business, was launched at its first international venue at the Kazakh-British Technical University (KBTU) in Almaty, Kazakhstan, on 16 April.