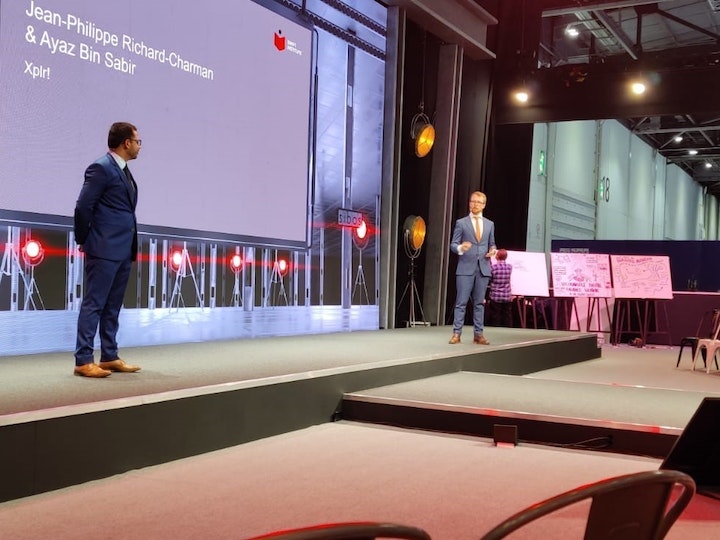 Two MBA students from Henley Business School have taken part in the final of the SWIFT Institute 2019 Student Challenge.

Jean-Philippe Richard-Charman and Ayaz Bin Sabir produced one of the top five ideas in the competition which invites both undergraduate and postgraduate students to invent solutions for financial sector problems.

The 2019 focus was how to use Artificial Intelligence (AI) to better detect fraud, especially as the Internet has paved the way, according to the project brief, for retail commerce being ‘no longer confined to traditional business hours; shopping can take place 24 hours a day, 7 days a week’.

Jean-Philippe and Ayaz’s team ‘xlpr!’ and their entry named ‘The Builder’ were competing for the chance to win £20,000, although sadly they did not win the prize.

‘The Builder’ utilises machine learning to introduce biometric verification systems for peer to peer transactions, instead of traditional manual cardholder verification. This machine learning would be based on the blockchain system, adding an extra layer of security to its operations. Preventing fraud is enabled by the system building a user profile based on their purchases and spending habits, allowing for potential irregularities to be spotted with ease.

The idea was envisioned from Ayaz and Jean-Philippe’s frustrations of having their cards blocked by their bank whilst travelling abroad, with the bank unaware of their travel plans. However, the information of the plane tickets being bought and subsequent taxi bookings and payments were from the same card for both transactions, which would suggest that access to one bank card would be needed.

Through a purchase learning platform that could be incorporated into the European Central Bank's TARGET Instant Payment Settlement process, this project looks to better the customer experience, the bank’s reputation and protect all parties’ finances. ‘The Builder’ increases security, enabling more trust from users and fewer fraud losses by detecting and preventing frauds at different points in the instant payments process.

Supported by the Google Cloud platform, the competition is open to anyone enrolled in any recognised university or higher education institution in Europe.

The best five ideas were pitched at the Sibos conference in London yesterday.

(This article has been amended to reflect that there were five ideas in the competition instead of eight.)

14 January 2019
A symposium investigating key questions around the housing land market was held by the Department of Real Estate and Planning at Henley Business School on 10th January. The aim was to gain perspectives, and exchange knowledge, from the variety of stakeholders with interests in land markets; the event was well attended with attendees from industry, government policy, third sector, professional bodies, land brokers, land promoters and academia.
Henley news