IDEAFEST Launches Internationally at the Kazakh-British Technical University in Almaty

Henley Business School's IDEAFEST Student Business Idea Competition, a contest to find the student team with the best idea for a business, was launched at its first international venue at the Kazakh-British Technical University (KBTU) in Almaty, Kazakhstan, on 16 April. 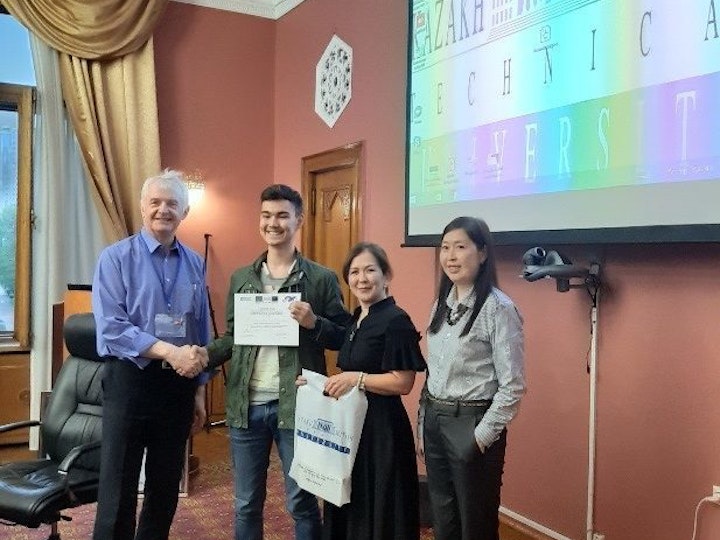 The launch of IDEAFEST was part of the visit to KBTU from 15-16 April 2019 by a group of Henley Business School delegates, including Vice Dean (International) Prof Yelena Kalyuzhnova, Henley Centre for Entrepreneurship Executive Director Jurek Sikorski and Leadership, Organisations and Behaviour PhD student Natalya Radko. They were joined by Prof Olga Khotyasheva, the Director of the MGIMO Business Incubator in Moscow.

The Henley Business School delegates participated at the KBCC Creative Industries Symposium, hosted by KBTU and sponsored by the British Council under the Creative Spark project. The Symposium was opened by the rector, Prof Kenzhebek Ibrashev, and heard several prominent KBTU academic figures speak, as well as British Council Kazakhstan and National Chamber of Entrepreneurs representatives. The IDEAFEST Competition was hosted by Prof Gulzada Shakulikova, the Vice-Rector at KBTU, and Dr Dinara Keshubayeva, the Head of Research Department at Kurmangazy Kazakh National Conservatory.

There were fourteen student teams who participated in Kazakhstan's IDEAFEST, with five being selected to present at the Final. The judging panel included Jurek, Natalya and Uakhat Bastimiyevthe, the founder and CEO of local start-up Verigram. Aron Karatayev, an engineering student at KBTU, was selected as the winner for his idea Sanorak, a smart wearable solar panel device for charging mobile phones. Aron impressed the judges with a prototype that he aims to begin testing over the next few months and showed great ingenuity and commitment. Aron was awarded the prize of a place at Summer Start-Up Boot Camp, a week-long hands-on course to give aspiring entrepreneurs to learn the skills they need to start a business from scratch. The Boot Camp will be held on 24-28 June, 10:00am to 4:00pm, in room G15 of the Henley Business School building, Whiteknights campus.

Aron was thrilled by the prospect of being selected to attend the Boot Camp, saying: "I'm really pleased to have won this round and very excited to visit the UK and learn how to turn my project into a business."

Jurek also remarked: "The standard of the individual business ideas and in particular the five that were short listed was high and I hope all will take away the experience and launch their entrepreneurship careers."

The second round of the Kazakhstan IDEAFEST will take place later in May, when a second winner will be selected to join Aron at the Boot Camp.

Professor Yipeng Liu FAcSS, Professor in Management and Organisation Studies at Henley Business School and Director of the Centre for China Management and Global Business (CMGB), held a webinar on 28 August 2020 titled 'The Challenges and Opportunities of a Global Health Crisis: the Management and Business Implications of COVID-19 from an Asian Perspective'.