On Tuesday 16 July 2019 the Henley Centre for Entrepreneurship joined with the University of Reading to congratulate Joanna Abeyie for being presented with the Distinguished Graduate of the Year 2019 Prize. 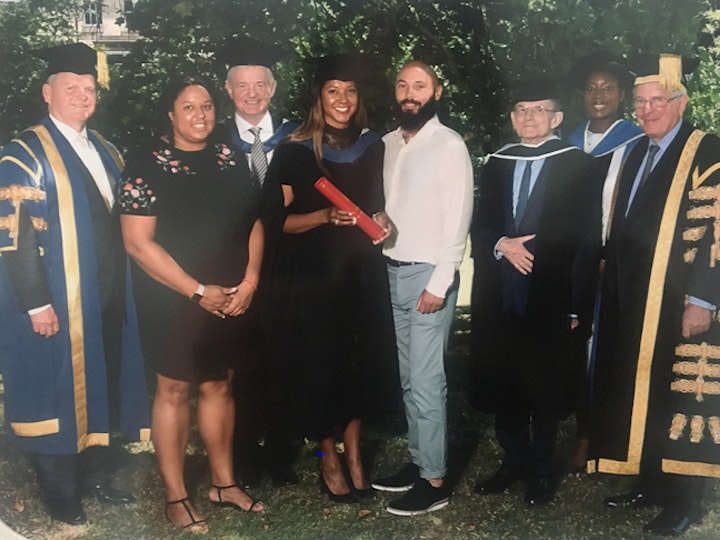 The award was presented to Joanna at the University of Reading and Henley Business School Graduation Ceremony in the Great Hall at the London Road Campus. Joanna graduated in 2008 with a BA in English and Sociology and since graduating has gone on to build a very successful career as a leader, an award winning campaigner and a champion of diversity, inclusion and equality. She is Managing Director of Hyden, a training and recruitment business for diverse talent seeking employment in the creative industries. Hyden itself started out as Shine Media, which Joanna founded back in 2009.

Joanna has also worked as a BBC journalist and been recognised for numerous awards, including the Federation for International Periodicals Publishing's (FIPP) Rising Star Award 2017, We Are The City Rising Star 2018 and Bullhorn's Recruitment Leader of 2018.

Delivering the oration was Dr Tom Woodman, Joanna's tutor whilst she studied at the University of Reading. He described Joanna as a sparky and confident student and a pleasure to tutor, sharing a variety of stories which testified to Joanna’s potential to 'shine' and build a successful career. He closed by thanking Henley Business School for the support it had given Joanna and the continuing collaboration that sees Joanna offering her services in speaking on campus and participating in student activities, perhaps most notably as a judge for the annual IDEAFEST Student Business Idea Competition run by the Henley Centre for Entrepreneurship.

Speaking after her award was presented to her, Joanna said: "I was really honoured to receive the 'Distinguished Graduate' award. My time at the University of Reading wasn't always easy and I didn't always feel like I fitted in. It was my tutor, lecturers and the university staff that really changed that for me. They kept me focused on the bigger picture, celebrated my differences and encouraged me to fulfil my potential across both my English and Sociology subjects.

Their support didn't end at my graduation; it continued well into my career and remains consistent today. I was introduced to the Henley Business School via my tutor and the staff there embraced me, not just as an entrepreneur myself but as a role model and adviser for those coming up behind me. It is to them, and in particular Jurek, that I owe a great deal. They kept me engaged in the work of the University and the growth of Henley Business School and in turn hopefully I've provided support they have needed. I look forward to continuing what has always been a very positive relationship."

Tom also spoke about his experiences of tutoring Joanna, commenting: "I was very flattered to be invited to make the presentation to my former tutee, Joanna Abeyie, as Distinguished Graduate of the Year 2019. In the old system I was her tutor for all three years so I did get to know her well. She was a wonderfully bright and lively student and very well supported by her own talented family. I vividly remember her father - a big man - giving me a long bear hug at her graduation.

"From the first she was very media savvy and was already running a series of online media and fashion magazines fourteen years ago, before we even had the word 'blog'. What most impressed me was her sense of mission. She had been shocked to see during her work experience even before she came to university how lacking in inclusiveness and diversity the media industry was. She was proud of her Ghanaian background and determined to make a difference.

"She told me recently she loved studying the classics of literature and how to use language but what she also needed was help in entrepreneurship, which I was rather less able to provide. The University fortunately rose to the occasion through mentoring from Jurek Sikorski and the Henley Business School. Joanna founded her first highly successful company to increase diversity with placements in the media only a year after she graduated. Now it has morphed into Hyden and she has also produced Hip Hop Millionaires for Channel 4, become the youngest Freeman of the City of London, and the youngest ever recipient of our award. We are all very very proud of her."