Sswap, an innovative matchmaking platform for students looking to swap or cancel their tenancy agreement in university halls accommodation, scooped the prestigious top prize of £1,000 at the Final of the 2019 IDEAFEST Student Business Idea Competition. 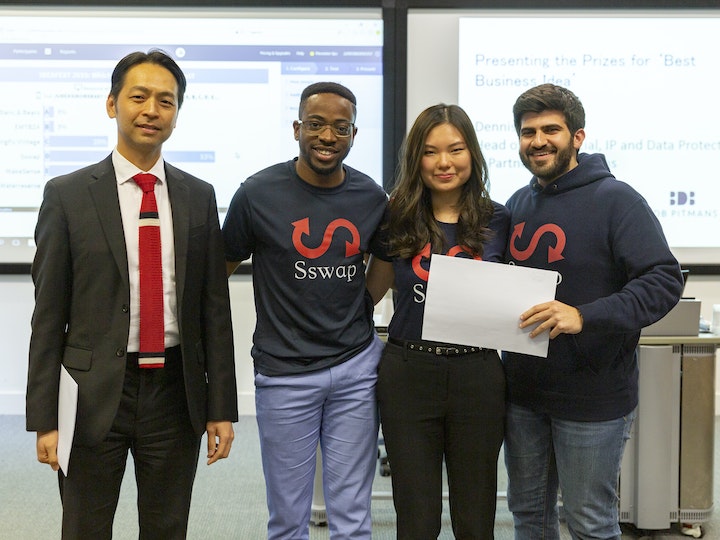 IDEAFEST, now in its sixth year since being founded in 2014, aims to find the student team with the best business idea capable of being commercialised. The Final, held at Henley Business School on Wednesday 24 April 2019, was closely contested by six teams of students presenting their business idea to a panel of judges and an excited crowd of over 40 audience members. After much deliberation the judges were unanimous in awarding the victory to Sswap, submitted by MSc Entrepreneurship students Ezequiel Anibal, Amer Nahouli and Debby Chau, and the team were presented their award by Dennis Lee, one of the judging panel and a Partner at IDEAFEST sponsors BDB Pitmans.

This year’s IDEAFEST had three prizes to be won – Best Business Idea, Best Innovative Business Idea and Best Business Idea for China from MBA Students. Like the two previous years, six finalists were selected to present and all of them presented with immense enthusiasm and belief in their business idea. The judges all commented that the quality of the business ideas was the best to date but after much deliberation they were unanimous in voting Sswap the winner. 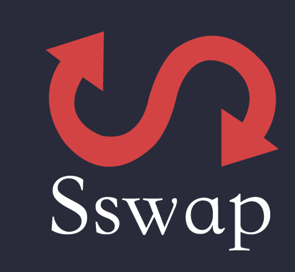 Sswap was described by the originators as a solution to a significant problem experienced by students being unhappy with their accommodation and wishing to change. Already the team of Masters in Entrepreneurship students have created real interest among the student population and have facilitated the move of several unhappy students to new accommodation.

After receiving the award Debby Chau said: "IDEAFEST was an outstanding platform to nurture our entrepreneurial mindset and skills. Winning the competition opens us doors to the right people at the right time, who can help us leverage and commercialise our business idea."

Readers can watch the video created by the Sswap team on YouTube here.

The award for the Best Innovative Idea category, decided by judging panel member Stefano Ciampolini, went to Elizabeth Wilden, Yan Yang and Fabian Cardozo who submitted their business idea called WakeSense, a device aiming to reduce fatigue related motor and machine operation accidents by monitoring brainwaves to check how awake the wearer is. 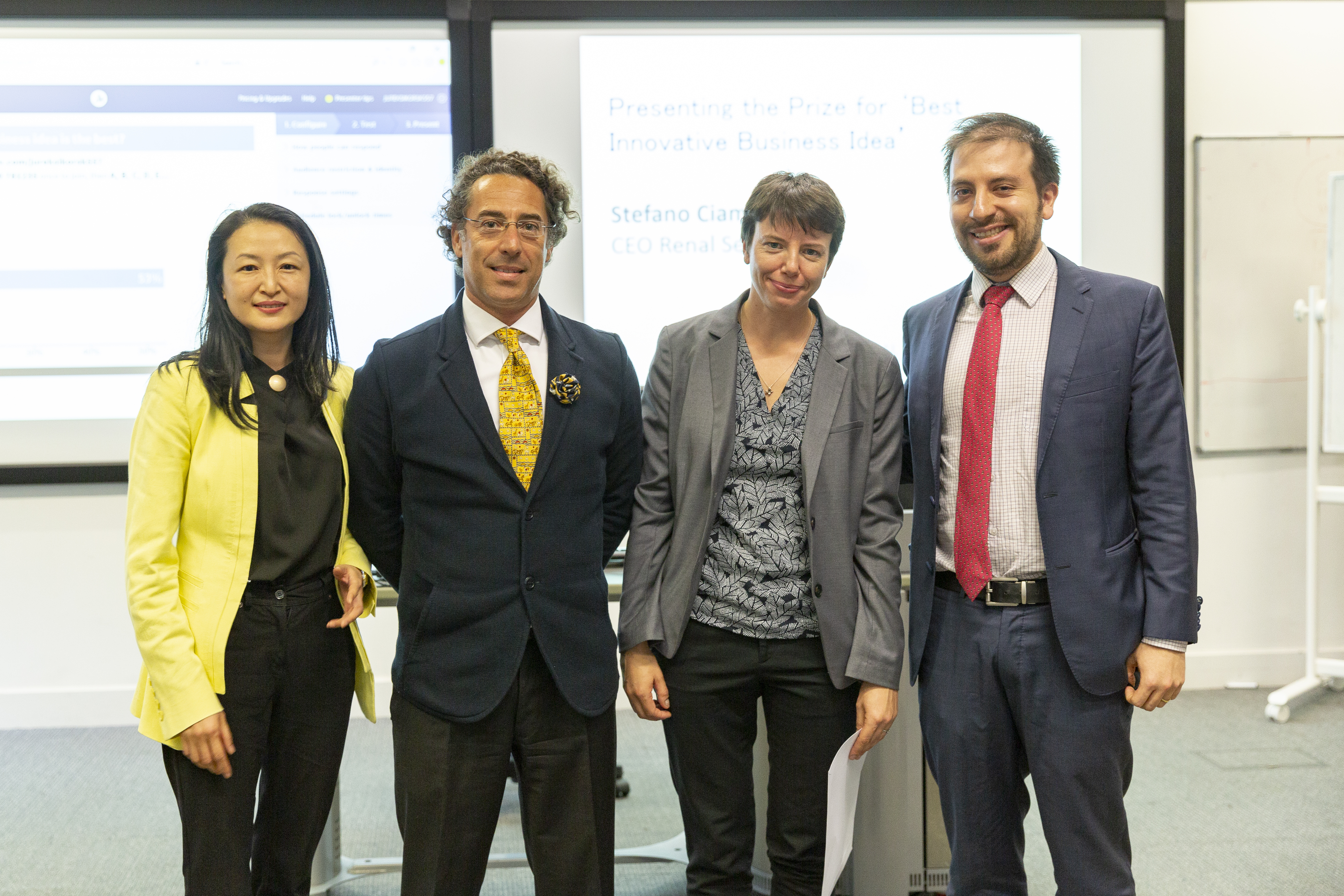 WakeSense achieved further success at the Final, as they were announced alongside Thousand Years Tea as the joint winners of the Best Business Idea for China from MBA Students. This award was judged by Prof Andrew Godley, the Academic Director of Henley Centre for Entrepreneurship, Andrew Gaule, the founder and CEO of Aimava and a Henley Business School alumnus, and Savio Kwan, the former COO of Alibaba. As reward for winning, both WakeSense and Thousand Years Tea receive a £3,000 bursary to help them research the market for their idea in China and in time launch a business in the region. 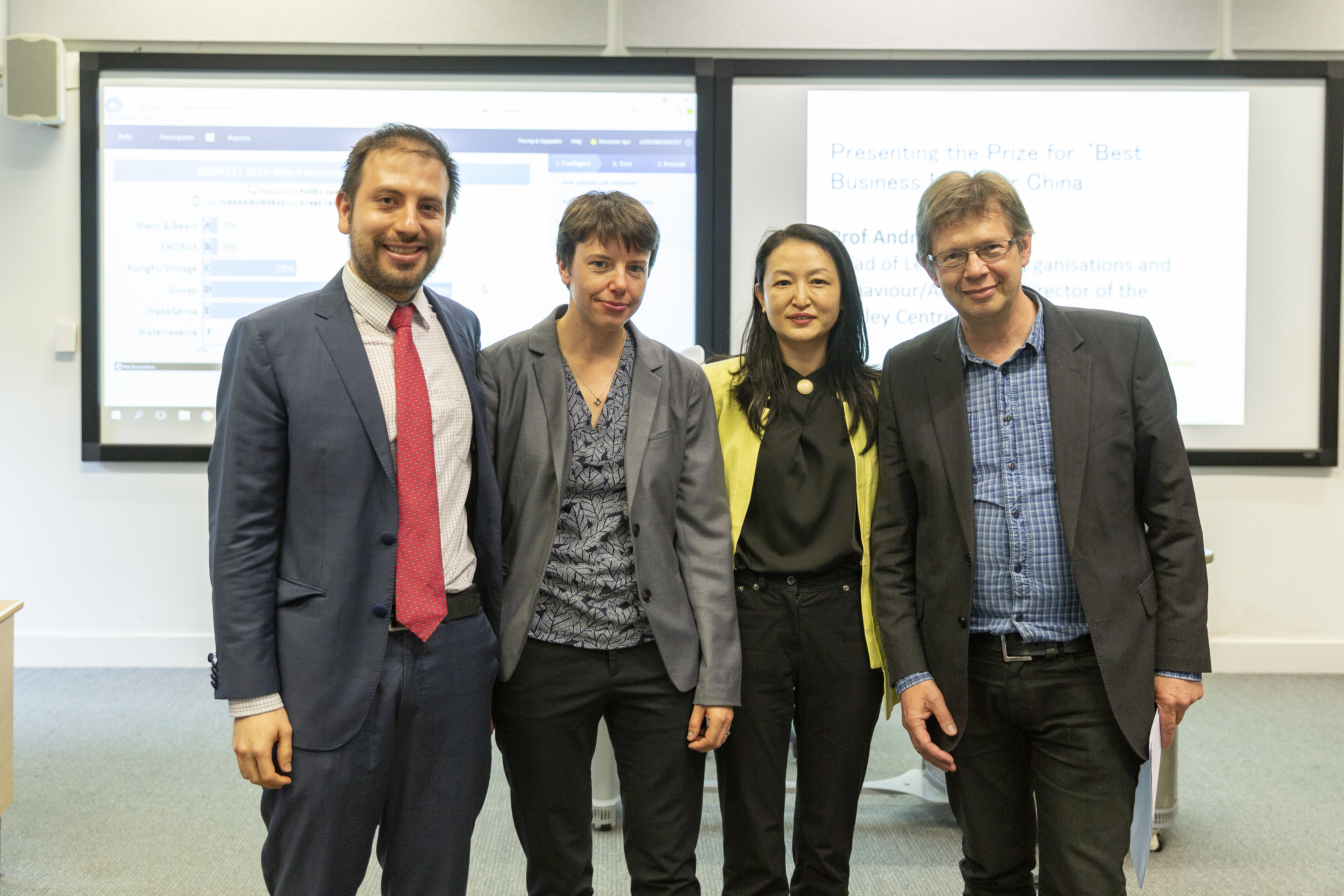 WakeSense were also announced as the recipients of the second place prize of £500 for the Best Business Idea category. Based on sound scientific research conducted by a member of the team in China, the idea was considered by the judges to be very clear and have a real potential across many applications from reducing fatigue related motor and machine operation accidents to improving learning.

The third place prize of £250 was awarded to Max Hawksworth, Rhett Galvin and Harry Kirby for their idea of Kungfu Vintage, an online clothing retailer selling unique and vintage pre-used branded sportswear, casual attire and designer pieces from sellers all over the globe for low prices. The business idea was conceived by Max and Rhett when they were at school together, having trading clothes for over eight years. They were joined by Harry when they became students and together they launched their business idea, which is now already selling.

Following the presentation of their award, Rhett said: "IDEAFEST has not only allowed us to see how our business really does have potential, but also how much scope there is to diversify Kungfu Vintage into different markets."

IDEAFEST received 31 applications this year, making it the most popular the competition has ever been. The other finalists were:

Here is what each of them had to say about reaching the Final:

Joe Waterhouse, Blanc and Bears: "I really appreciate the opportunity that IDEAFEST has given me."

Charles Domician, EMTBZA: "I benefited immensely from the competition. I particularly appreciate the motivation and energy Jurek Sikorski always built in me regarding the potential value of the EMTBZA idea."

Andrew Dabbs, Waterreserve: "The opportunity and experience of IDEAFEST was enjoyable and it was good to see what the other participants presented."

In addition to the cash prizes, the top three will all receive mentoring from Henley Centre for Entrepreneurship, BDB Pitmans and Renal Services Ltd and all finalists also received a copy of 'Little Wins: The Huge Power of Thinking Like a Toddler' by Ella's Kitchen founder Paul Lindley, featuring a foreword by Sir Richard Branson. A best-seller on Amazon, Paul describes the behaviours of toddlers that adults have forgotten and which they should relearn. The book is now on the Henley Centre for Entrepreneurship recommended book list for all students!

The Competition also saw the audience vote for their winner enabled by Poll Everywhere, a web based interactive audience response service. The audience seemed to agree with the decision made by the judges, with Sswap gaining over half of the audience votes.

Congratulations to all winners, runners up and all the finalists from Pitmans Law, the IDEAFEST Competition judges and the Henley Centre for Entrepreneurship.

Henley Centre for Entrepreneurship would like to extend a special thanks to the judges:

For further information about the IDEAFEST Competition, please contact:

Henley Centre for Entrepreneurship is part of Henley Business School at the University of Reading, which provides a hub for teaching and research in the subject, inspiring students from across the University to embrace, develop and apply their entrepreneurial abilities.

BDB Pitmans Law has a wealth of experience in supporting entrepreneurs. Their Kickstart service has been designed specifically to provide advice and support to start-ups.

Founded in 2007, Renal Services operates twelve dialysis units across the UK, aiming to improve patients’ quality of life and, allow them easier access to local haemodialysis and more personal freedom.