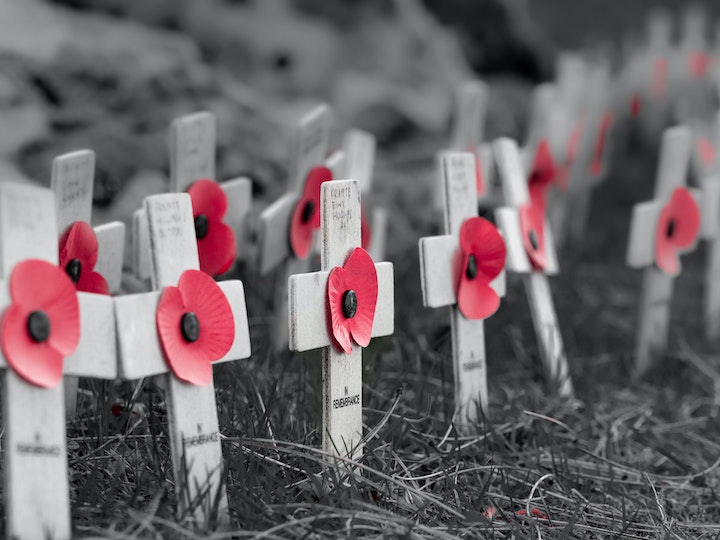 On Remembrance Day, poppies are prevalent, pinned on people’s jackets, visible on roadsides and along high streets. The UK chooses 11 November, the day the armistice was signed to end World War One, to remember those who died in conflicts that it has engaged in.

But how do companies and organisations remember those lost in war? Many take a minute’s silence at 11:00, the time at which WW1 officially ended. We mark such a silence in an outdoor space at the centre of the university’s main campus. Many public sector institutions pause to mark the occasion in the same way. Central and local government departments, inherently linked to the British state, stop what they are doing and observe the silence to show their respect.

Those companies with a long enough history may also have lost members of staff in conflicts. Some have constructed war memorials, in the same way that nation-states have done. Much has been written on national war memorials but far less on memorials constructed by companies. My own work with Victoria Barnes on the Bank of England examined the memorials constructed there after the two world wars. The Bank erected a bronze statue of St Christopher at its headquarters in London to commemorate 72 staff who were killed in the 1914-1918 conflict. The names of all those who lost their lives were inscribed on the plinth of the memorial itself, as well as in stone panels in the entrance hall at the Bank of England head offices.

A plaque commemorating those 65 staff that died during World War Two was placed at the feet of this statue in 1947. A committee was established to oversee the commissioning, manufacture and unveiling of the memorial. The plaque, a 3ft, circular, bronze memorial wreath, is far more modest in scale than the statue. WW2 was a different kind of conflict, involving civilian death, genocide and physical destruction of nations. Memorials to WW2, such as the one at the Bank of England, took on a visibly different form from those commemorating the First World War. They articulated a greater sense of collective loss and expression of victimhood. The names of those staff members lost (both serving staff and civilian staff lost through air raids) were also listed on stone panels in the entrance hall.

In 2014, the Bank of England held a remembrance service to mark the centenary of the outbreak of the First World War and another ceremony in 2018 to mark the 100th anniversary. Two minutes’ silence continues to be observed by the Bank to recognise the armistice on November 11. It has chosen to remember. It has historicised and memorialised war through physical artefacts, ceremonies and staff events. It is aided in the act of remembering by its continuity of organisational form and physical location - it is an institution of some longevity (founded in 1694) and its offices have remained on the same site for centuries.

In a similar way, private companies continue to remember their war dead. Any walk around UK railway stations quickly reveals memorials to railway workers who died in both world wars, when railways were privately owned. The Railway Heritage Trust estimates that between 20,000 and 30,000 railway workers lost their lives in WW1. Lloyds Bank lost 686 employees and the Prudential Insurance Company lost 789. The Prudential, Lloyds and Barclays all erected memorials at their head offices in London. Lloyds and RBS have made their war memorials very visible via their websites. Royal Mail has a database of war memorials online, having released 75,000 men to fight in WW1. It even had its own regiment – the Post Office Rifles – in which 12,000 men served. BT holds a ceremony every year on 11 November in BT Centre, London and hosts a website to remember those staff who died in two world wars. In November 2018, BT held a ceremony of remembrance, releasing 8,858 poppies – the number of postal and telecoms workers who gave their lives during WW1 – as well as unveiling a new war memorial.

For those institutions with a long enough history, the building of monuments, and the ceremonies that take place around them, assign values to their organisational communities. Using artefacts and ceremonies permits members of the company to consider their collective purpose and the ties among them. They are used to re-establish responsibility to the people that are employed, to reinforce the organisational or corporate community. Remembering the past remains a potent force for unifying in the present.

With thanks to Mike Anson and the archivists at the Bank of England and David Hay, Head of Heritage and Archives at BT for their assistance with this project.

Images courtesy of the Bank of England Archive 15A83/1

How does inflation impact businesses?

As the UK faces a cost of living crisis not seen in this country for decades, Professor Adrian Palmer outlines how inflation impacts businesses and brands.

Supporting start-ups during the COVID-19 crisis