75 years of Henley: A journey through British music

Seven decades. Seven playlists. Travel through time with us as Henley celebrates its 75th anniversary through a whistle-stop tour of British popular music.

The year 2020 marks the 75th anniversary of Henley Business School

Established first as the Administrative Staff College, it was set up after the Second World War in 1945, bringing together both public and private sector employees from across the country to support the UK’s post-war economic rebuilding plan and improve the quality of UK management. Fast forward more than seven decades, and while much has changed at Henley – with far greater diversity of learning, learners and locations now than then – our vision for the world of business remains strong.

The events of this year have meant it has not been possible to bring people together to celebrate this latest milestone in our history. So instead, we have decided to share something that our students, staff and supporters (past and present) can enjoy wherever they are in the world. To do this, we looked to another industry which has witnessed its own share of change and innovation over the past three quarters of a century.

This is a whistle-stop tour of British popular music over the last seven decades. The accompanying music and narrative was selected and written by industry expert and author Bob Stanley together with music discovery site Song Sommelier. As we travel through each decade we detail key developments happening at Henley to which these songs may well have been the soundtrack. Taken together, these playlists are a startling record of variety and innovation. As well as the most significant names and major genres, they also feature the occasional more obscure act to illuminate the era, recognising the efforts of pioneers and forgotten but key contributors. They are not strictly chronological and are designed to be an enjoyable listen. 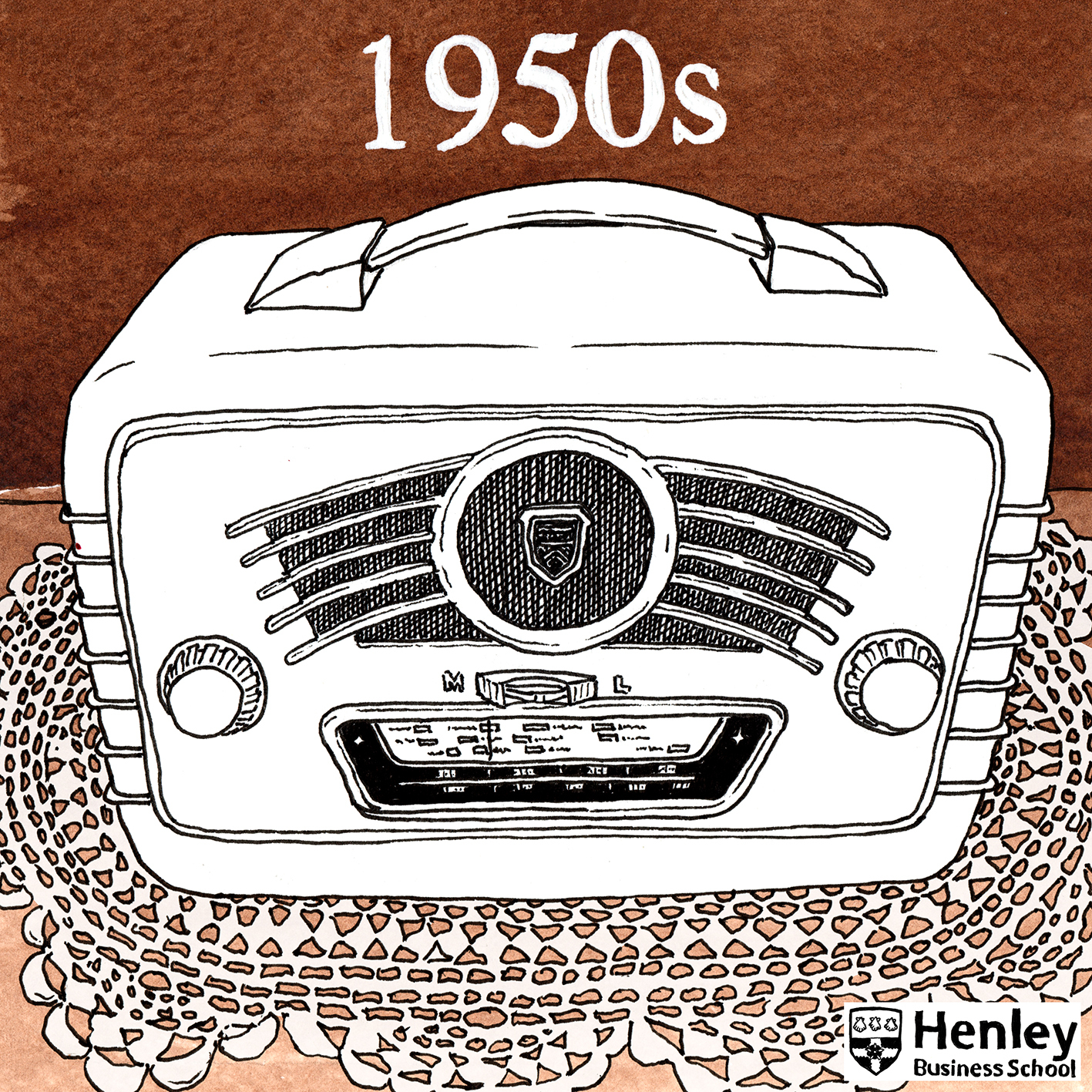 At the dawn of the 50s, British pop was entirely in thrall to America. The British musical – pride of the nation 50 years earlier – barely existed; singers like Dickie Valentine and Lita Roza mostly recorded pre-made American hits. It was cosy, with a much-needed post-war gentility.

Having found itself a home in 1946 at Greenlands, on the banks of the River Thames, by the 50s the Administrative Staff College had purchased the freehold for the building which had previously been owned by the family of the newsagent WH Smith, and it had courses up and running.

Officially opened in the previous decade by then Prime Minister Clement Attlee, the building looked a little different to how it does now – it had been disguised with camouflage during the war in the hope it would be hidden from Hitler’s raids, and was not repainted white until the 60s. It also welcomed another high profile guest when Prince Philip, Duke of Edinburgh, visited the college in 1957. 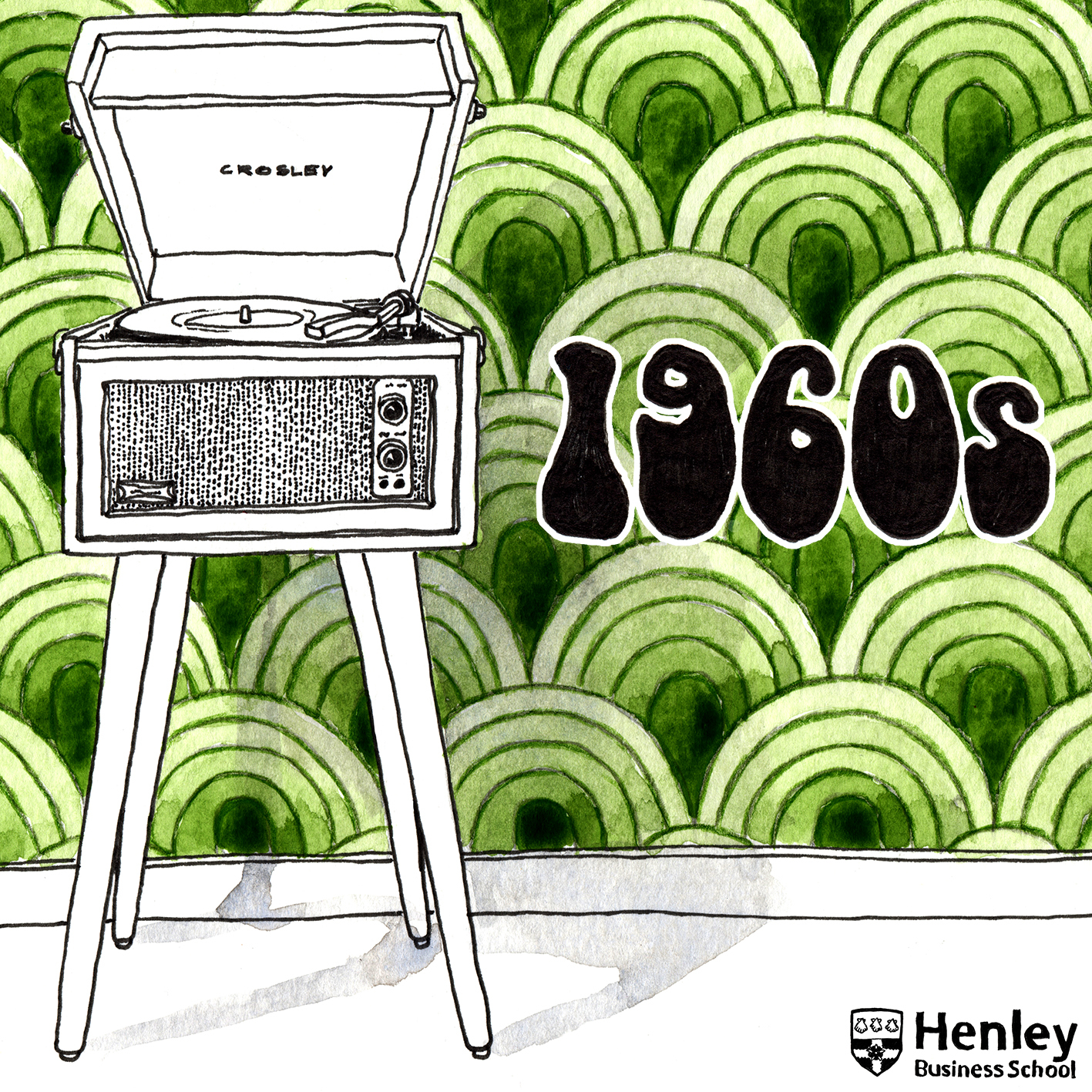 The instrumental sounds of the Shadows and the Tornados (produced by the ground-breaking Joe Meek) dominated the early 60s’ charts (perhaps because The Beatles and other primitive beat groups from Liverpool were abroad, learning their trade in Hamburg where rock’n’roll was still a huge deal). But 1963 belonged to Merseybeat. Southern R&B groups burst through a year later, with The Rolling Stones and The Kinks scoring UK number ones, while groups emerged from outposts like Belfast (Them) and Newcastle (The Animals). All were huge successes in America.

The sound became more jagged and aggressive with The Who in ’65, and the introduction of British psychedelia, both hard-edged (The Accent) and soft (Pink Floyd). The first inter-racial bands appeared, emerging from the soul scene, with The Equals and The Foundations both scoring number ones. Female singers – some, like Lorraine Silver, barely into their teens - threw aside their ball gowns, wore Mary Quant gear, and struck out for independence, the most adventurous and successful being Dusty Springfield, Sandie Shaw and Petula Clark.

The CND trad jazz scene morphed into the Soho folk world, with incredible young guitarists like Bert Jansch and singers like Sandy Denny. By the end of the decade they had formed groups like Pentangle and Fairport Convention, as psychedelia’s light touch was discarded for maximum heaviness. British acts like Led Zeppelin paved the way into the 70s.

In Henley, a unique study of team behaviour which would become a seminal piece of work on management teams began towards the end of the decade. It was led by Dr Meredith Belbin, a highly respected academic and industrialist, and continued well into the 1970s. The Belbin Team Roles identified as part of the research have been used by organisations and teams around the world. 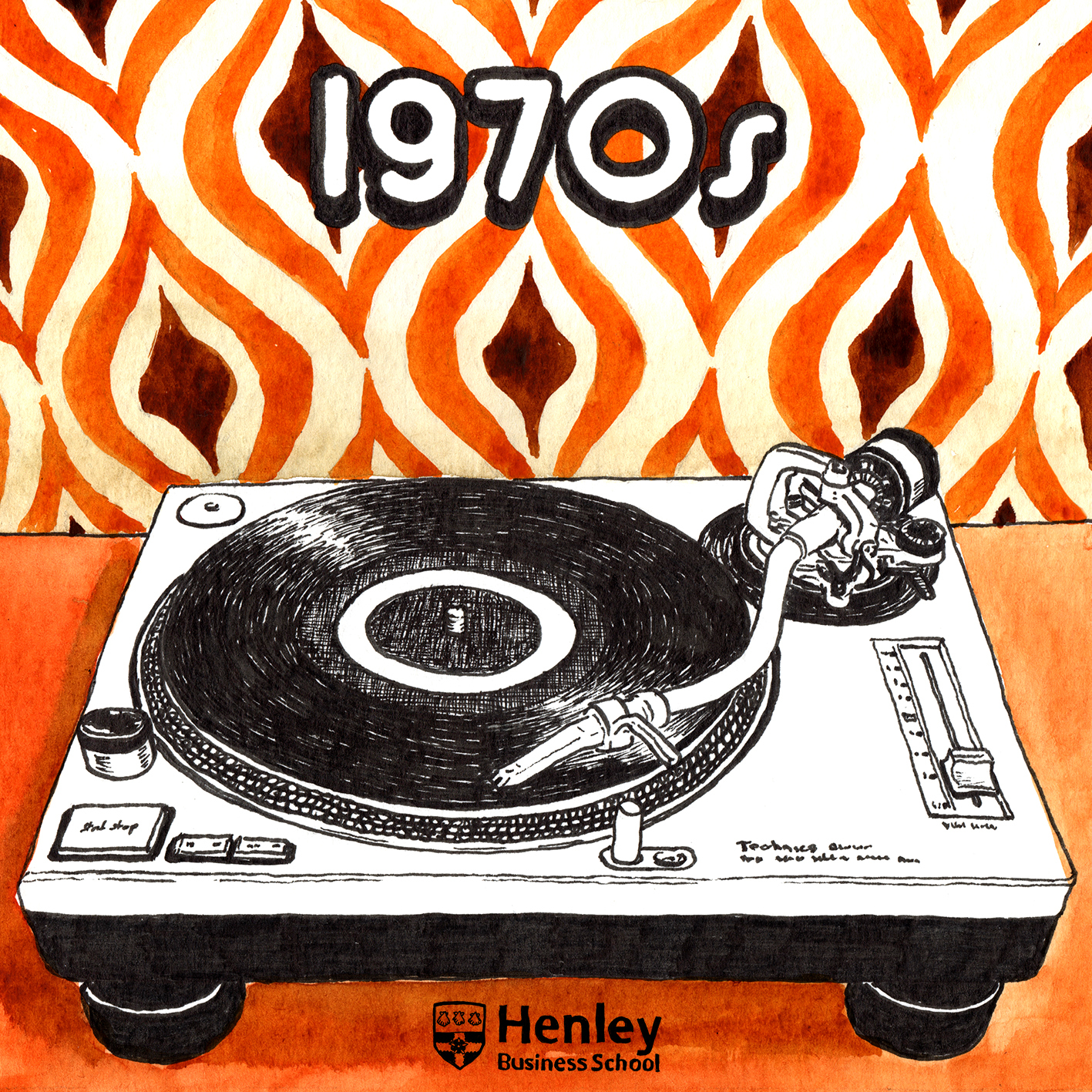 The early 70s were all about expecting the ‘new Beatles’ to turn up. T Rex appeared to be the real deal, and spearheaded the Glam Rock boom which David Bowie and Roxy Music (with Bryan Ferry and Brian Eno) took to new art-rock levels, while Slade and Sweet explored its tough-pop aspects. Singer-songwriters like Gilbert O’Sullivan and Elton John were initially a reaction to underground heaviness (Deep Purple, Black Sabbath) and the complexities of progressive rock (Yes, Caravan).

It was a fallow period for women, who didn’t want to compete on men’s terms – Lynsey De Paul and Mandy More were rare stand-outs before Kate Bush emerged as a new kind of role model at the end of the decade. Bush’s contribution to the role of women in British pop seems immeasurable.

The belt-tightening economic crises of the mid 70s were mirrored by the stripped back R&B of Pub Rock (Dr Feelgood, Eddie & the Hot Rods), but the underlying anger was more viscerally channelled into Punk Rock, the independence and immediacy of which threatened the traditional structures of the record industry and music press. Punk’s barrier breaking also helped to open the doors for the voiceless, with British reggae (Birmingham’s Steel Pulse) and lovers rock (Janet Kay). It also led to the first sizeable wave of all-female bands, like The Raincoats.

Back at Greenlands, 1974 saw the first Masters (MA in Business) launched. By the end of the decade this had been renamed the MBA, or Master of Business Administration. Almost 50 years later the MBA remains Henley’s flagship programme, connecting participants to global business and a worldwide network 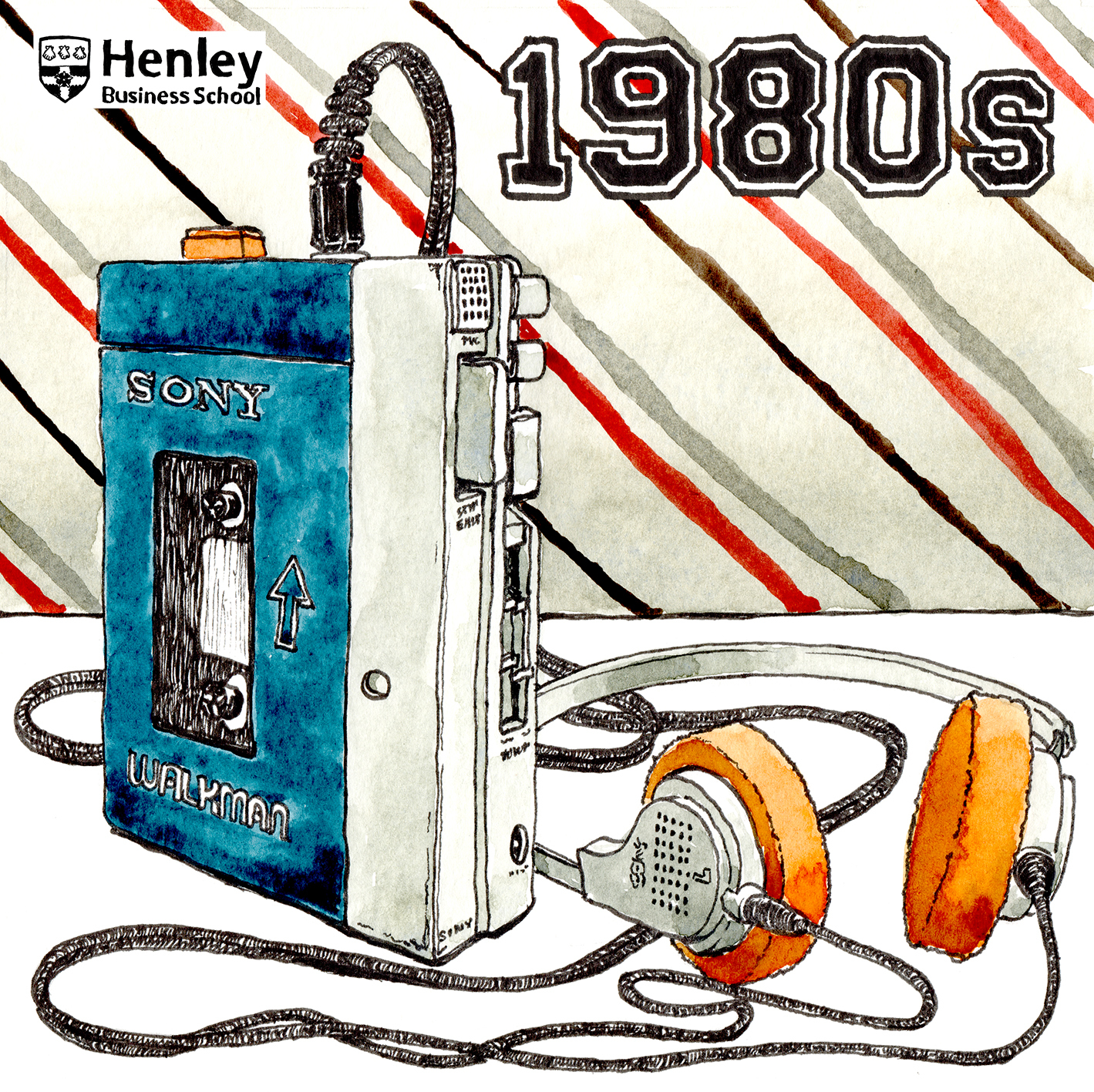 The post-punk age’s lack of boundaries allowed the early 80s to become an open field for anyone from 60s soul enthusiasts (Dexys Midnight Runners) to the sex-obsessed (Adam and The Ants) or the pioneering synthesiser acts (Orchestral Manoeuvres in the Dark, Depeche Mode) to reach the top 10. Independent labels like Factory (New Order) and Rough Trade (Robert Wyatt) were musically a step ahead of the major labels. For the first time since the early 60s, groups from as far away as Newcastle (Hurrah, on Kitchenware Records) and Scotland (Orange Juice and Josef K, both on Postcard) felt they didn’t have to move to London to ‘make it’.

The American influence was minimised, but led to the Britfunk boom (Level 42, Linx). The major labels had reasserted control of the industry by the mid-80s, leading to smoother sounds (Sade) dominating the chart, as well as the underground guitar-led C86 scene (The Pastels) named after an NME cassette. Then, imported house and techno records from America inspired a homegrown scene that led to bedroom music makers like Bomb The Bass and A Guy Called Gerald scoring major hits. This blurred with the indie scene to create the Manchester or ‘baggy’ sound (Stone Roses, Happy Mondays, Inspiral Carpets). The club scene, and outdoor raves, took over from the gig circuit.

While British music was enjoying a boom from home-grown talent, at the Administrative Staff College the international experience for which Henley remains renowned was beginning to take shape. Overseas operations began in Hong Kong, Finland, Denmark and Germany; to this day Henley has campuses in the three European countries, as well as South Africa, Malta and Malaysia. 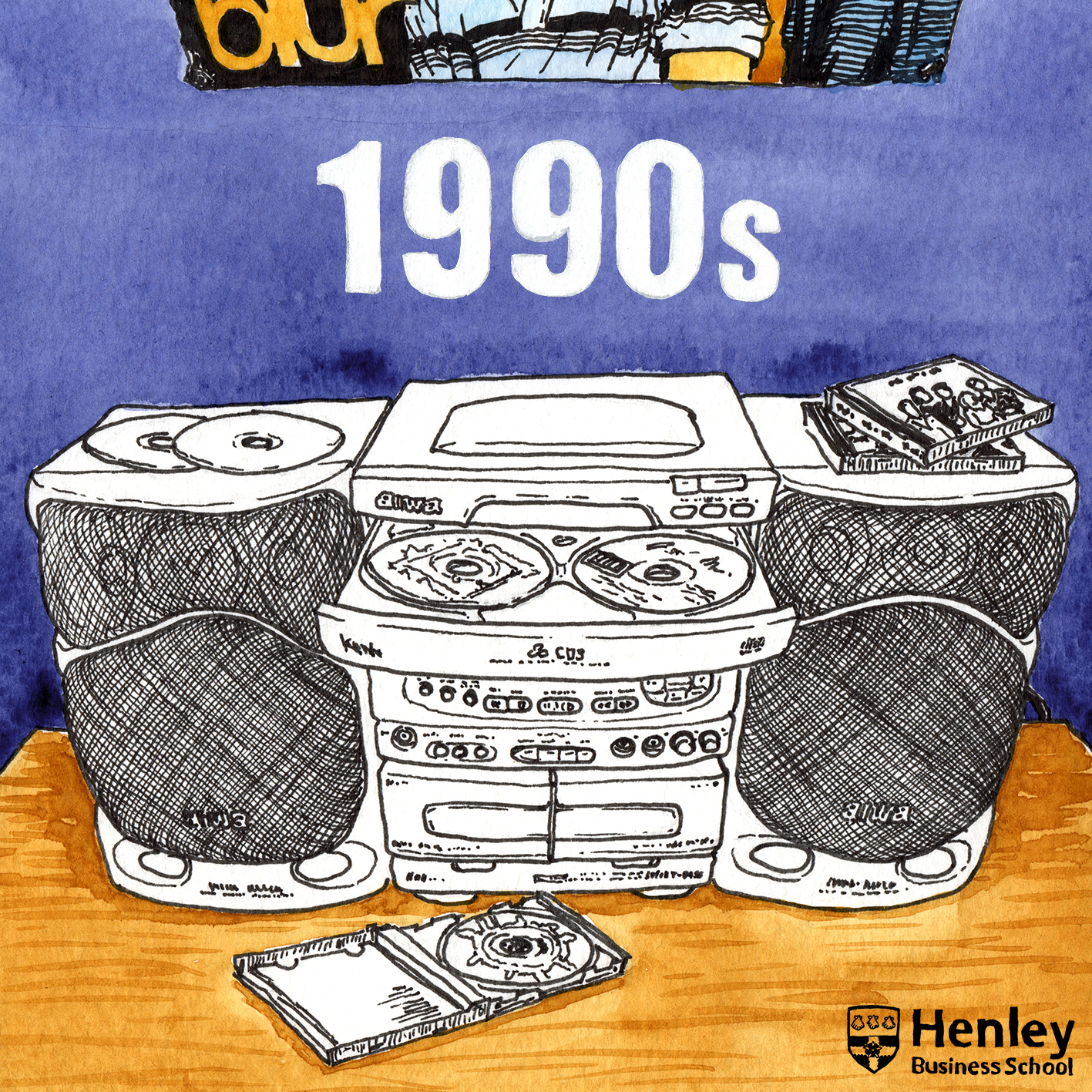 Raves and the advent of sampling led to the DIY sounds of East London that began with the Shut Up And Dance label (Ragga Twins) and led to ever-faster beats that ended up mutating into Jungle and Drum and Bass (Omni Trio, 4 Hero) and happy hardcore (N-Trance). As a reaction came the 98 beats-per-minute Balearic sound that dominated 1990 and ’91 (Primal Scream, Massive Attack), which was mirrored in guitar music by the slowed-down shoegaze scene, exemplified by Slowdive.

Meanwhile, rave split into darker sounds (4 Hero) and album-oriented dance music (Underworld, Orbital), while outside of London, rave pop (Baby D, Strike, Nightcrawlers) continued to dominate clubs and radio. The sludgy rise of grunge in America led to a reaction yet again, with crisply dressed, retro-futurist groups like Denim, Pulp and Earl Brutus citing the influence of 70s Glam, and paving the way for the more obviously regressive, 60s-inspired Britpop sound (Blur, Oasis, Supergrass) in the mid-90s. The Union Jack waving of Britpop was cranked up a notch by the Spice Girls, who led to a late decade boom in innocent bubblegum pop (B*witched) as well as paving the way for the acceptance of more all women or female-led acts in the next decade.

By 1991, Henley, which had already undergone one name change in the previous decade, was known as Henley Management College, having been awarded a Royal Charter. In the same year, over at the University of Reading, the ICMA Centre – which would later become part of Henley Business School when the two institutions merged – was established, with cutting-edge trading rooms. In 1992, Henley Business School Africa was established in Johannesburg, beginning Henley’s presence in South Africa and its MBA offering, which continues to go from strength to strength 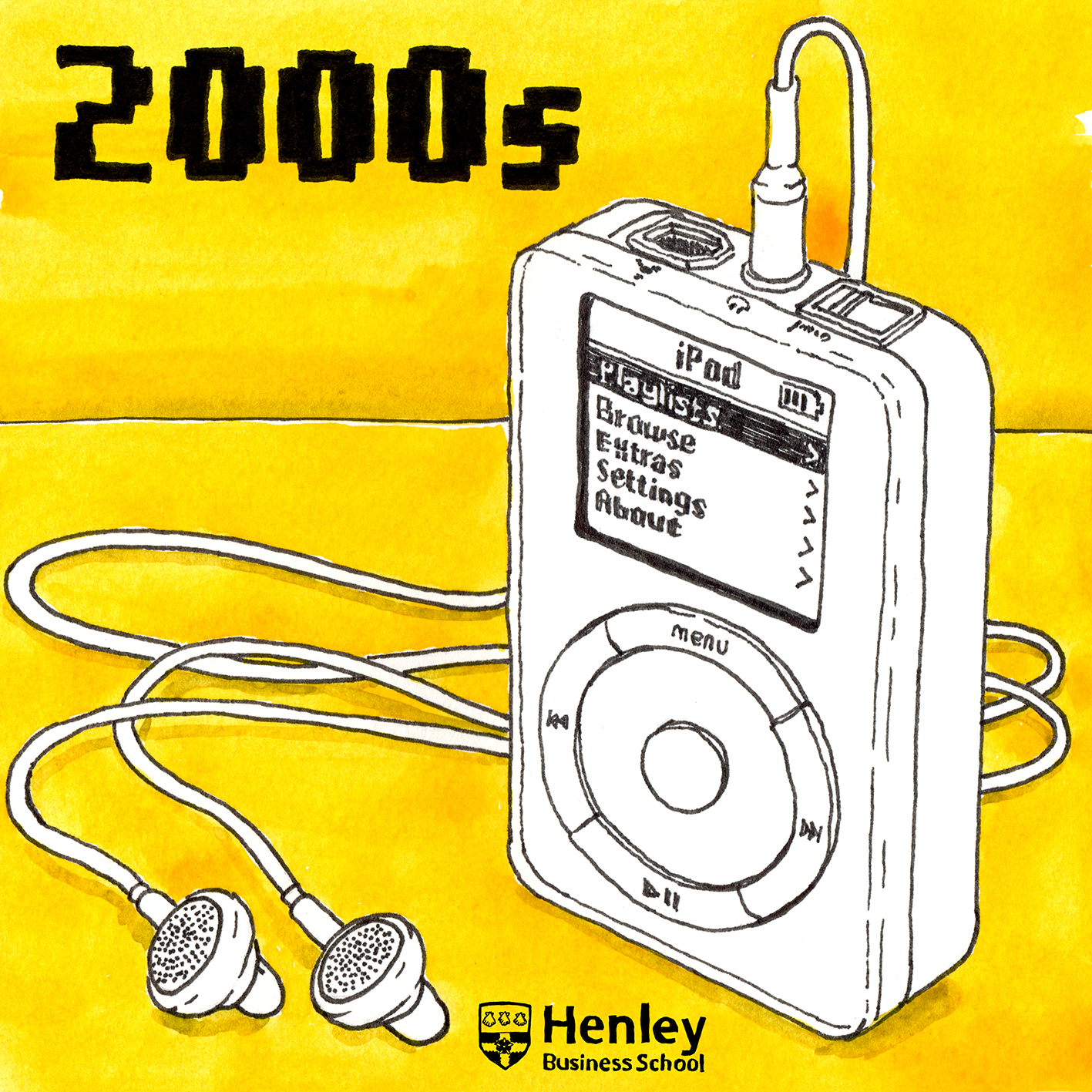 The clean two-step sound of UK Garage was a reaction to the more masculine club sounds of the late 90s and had a commercial peak in 2000 (Artful Dodger, Sweet Female Attitude, DJ Luck and MC Neat). Its smoothness was countered mid-decade by the rise of Grime (Lady Sovereign, Wiley) – the first genuinely British-sounding response to hip hop, though only Dizzee Rascal had sustained commercial success – and the bass-heavy Dubstep (Burial, Digital Mystikz).

TV talent shows led to many of the biggest acts of the decade, the most successful being Girls Aloud, whose records were produced by the Xenomania collective. The X Factor led to some high quality pop (Shayne Ward, Leona Lewis) as well as many more low-grade cover versions. Britpop’s decimation of the indie guitar scene in the late 90s led more adventurous acts like Broadcast and Radiohead to explore less clichéd, textural guitar sounds and electronica. There were also the faint ripples of rock star antics from the likes of The Libertines and Arctic Monkeys.

The 2000s was also a decade which saw major change for Henley. In 2008, the management college merged with the University of Reading and Henley Business School was formed. Our UK teaching now expanded across two campuses, with a new home at Reading’s Whiteknights base. 2005 saw the launch of our MBAid programme, providing a working relationship between MBA students and a range of NGOs in South Africa.

Stay tuned for our final podcast next week...